DAS raises the bar in barbecue. 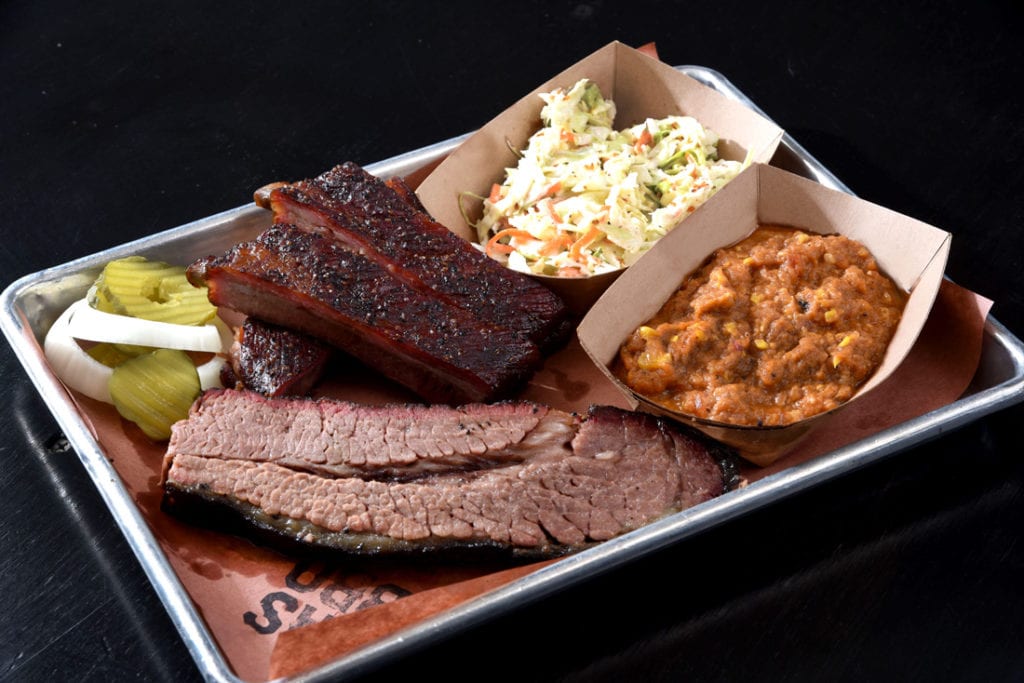 Nothing says “self-care” quite like taking myself out for good barbecue. Knockout ’cue is the stuff of my dreams, but oddly, I’ve found it tough to hold on to an Atlanta favorite. Sure, I’ve fallen hard for a couple places, but they’ve either burned down or closed forever overnight—no warning, nothing. Still, hope springs eternal, and maybe that’s why I felt giddy driving down to the Westside’s DAS BBQ, built in a former Pizza Hut on Collier Road, that foodie friends couldn’t stop raving about.

The colossal propane tanks-turned-smokers parked out front are a dead give-away: I’m in the right place. On my way in, I amble by cords of stacked, aromatic hickory wood, perfuming the air. Inside, the counter service-only space is cozy and rustic, and features a large interior window through which waiting customers can view meats being prepped and smoked. DAS’s owner, Stephen Franklin (no relation to Aaron Franklin from Franklin Barbecue in Austin), describes the decor as “industrial outlaw,” but to me, it’s more roadside tavern: wooden barrels, old butcher cleavers on the walls, a single menu and zero pretense.

A handful of DAS BBQ-branded tables are inside with more seating on the patio. The set-up and flow through the two spaces exude positive feng shui.

Franklin came to barbecue after several years in marketing and has never looked back. His eyes light up as he describes his dream of making Georgia the most “inclusive, creative barbecue experience in the country.” Franklin is a local—he grew up in Decatur—and that comfortable hometown confidence spills over into his business approach and management style. He is charming, knowledgeable and as engaging as any boss you’d ever want, a quality he shares with Stephen Sr. who’s often on site helping out.

As junior tells it, he came up at his father’s side, watching his dad smoke whole hogs in the backyard. Whether it’s nature or nurture, barbecue is in Franklin’s bones.

We began the evening with a rack of St. Louis-style ribs, approaching the experience like a fine wine tasting, letting each bite sit on the palate for a bit, breathing in the fruit and earthiness. Fragrant and tender, mopped with something akin to Carolina-style sauce, each succulent rib had a rosy smoke ring (telltale sign of prime ’cue), glistening black crust outside and the concentrated flavor of sweet jerky. Next up was the smoked chicken. Marinated in vinegar, tamari, apple juice and special seasonings, then smoked for just south of two hours in the rotisserie, the pristine white meat had a lovely hickory scent and a meaty chew but was rather dry. I swore off white meat poultry years ago, and I stand by the belief that if He had it to do all over again, God would make chicken and its kin entirely dark meat. Just tastes better, period. By contrast, the pulled pork butt was hog heaven: tender, mouthwatering chunks of pork with coveted nuggets of crusty tar-black bark. Both the peach barbecue sauce and the “high octane” red sauce (made with brewed espresso and molasses) complemented the meats perfectly.

Top-notch side dishes are made in-house daily. The collards are a family recipe: Long cooked in cider vinegar, apple juice and a hint of Tabasco, they were a table favorite. Mac ’n’ cheese is rich but not cloying, the large pasta shells commingling perfectly with the tangy, creamy cheddar sauce. We couldn’t get enough of the German-style red potato salad flecked with sweet, intense red onion and snappy diced celery. But the king of sides was the chunky, spicy cream corn: fresh yellow corn, loads of cream and shaved parmesan, and a heavy dose of bright green jalapeño that the little ones might wrinkle their noses over. For drinks, we suggest one of the refreshing local craft IPAs on offer such as Scofflaw or Monday Night.

We’d been told to come early for items that sell out fast and heeded that advice for our next trip. Smoked wings were a priority, as it seemed they were for plenty of other folks lining up early this particular late Sunday morning. Tender and meaty with deep smoke flavor and ruddy, orange-red burnished skin (reminiscent of tandoori), it was easy to see why the wings sell out before the lunch rush. We followed that with the brisket, a favorite of the local barbecue community. Both the rich, marbled point and the meaty flat had a poppy-red smoke ring just beneath the blackened bark—clean, juicy, not-at-all greasy.

Also notable are the Elgin, Texas-sourced sausages, available hot or mild. I reckon the hot was about 500 on the Scoville scale (in other words, even kids can handle it), the tangy spices and mild cheddar bits rendering a superbly well-balanced bite. The mild was, to our jaded palates, the equivalent of a prom wallflower: timid and shy and just aching to let her hair down (in other words, folks, go with the spicy). The Brunswick stew, a long-cooked comfort food made with pork shoulder, corn, tomatoes and spices (usually lima beans, too, but none here, thankfully), is worth the trip alone.

If sweets are your thing or you’ve got kids in your party, don’t pass up the addictive white chocolate banana pudding or the homemade brownies. But for my money, I’m happy to stick to the basics, which, in this case, are anything but basic. And with the recent opening of another location on Memorial Drive, it’s pretty much a guarantee that DAS BBQ—lucky for me, for us—is here in Atlanta for the long haul, well on its way to hitting institution status.

Got Chickens, Koi or Parrots?