This mobile vet works with pets in ponds and backyards. 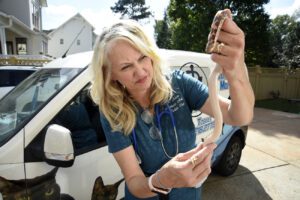 Dr. Carol Tobias’ workdays are rarely the same. A veterinarian with a mobile business, she might begin with a visit to a koi pond in Sandy Springs and end up in a backyard full of chickens in Dunwoody. In between might be sessions with exotic birds in Brookhaven or guinea pigs in Buckhead.

Tobias fell into the role of traveling vet by an accident of training. Her four years at UGA’s veterinary school taught her about cows, dogs and chickens, but her real love was the “exotics,” such as birds and fish. Her last year included an internship at Orlando’s SeaWorld. After graduating, the Sandy Springs native went back to Florida to practice and take specialized classes at SeaWorld. When she returned to Atlanta in 2001, she volunteered at the Georgia Aquarium, where she ensured incoming fish were healthy. That led to people asking if she would extend her expertise to their backyard pond pets.

“I started treating fish, and then people would say, ‘And my dog needs a rabies shot,’” she says. “Other people also had cats, birds, chickens, guinea pigs, rabbits and goats I started treating. So I found the job by accident; I never thought I’d have my own business.” 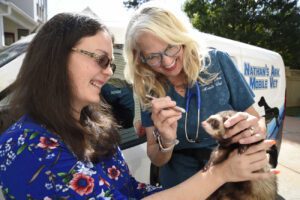 Nathan’s Ark Mobile Vet Service, named for Tobias’ son, was formally launched in 2010. Today, it’s one of a small number of veterinarian businesses that make house calls in the metro area. The service’s convenience and competitive pricing have kept her busy, especially during the pandemic.

“I get feedback from pet owners all the time that they really like how it’s less stressful for the pet for me to come to them,” she says. “There’s no waiting in the lobby. For people with multiple pets, it’s economically better: one house call, one fee.”

The smallest pet she’s worked with is an African dwarf frog, and the strangest was a hermit crab the owner wanted to be sure was healthy. (“I was able to weigh it and do a physical,” she says proudly.) Koi owners get very attached to the pets that can recognize them and be fed by hand. And as the owner of an African grey parrot, Tobias has no fear of exotic birds.

“Many vets won’t see them because they’re difficult,” she says. “But I’m comfortable with them. And I see a lot of fish that have health issues around water quality and feeding. They get tumors, and I have done surgeries on them. They’re a minority of my practice, but it’s great for owners who want them treated.”

When more sophisticated care is called for, Tobias can treat animals from a space she leases in a Decatur clinic. “That’s where I can do things like x-rays,” she says. 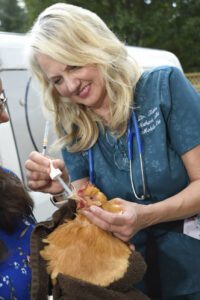 Another service Tobias offers is in-home euthanasia. “It’s a much more peaceful process than doing it in a clinic,” she says.

But most house calls are full of happy barks and purrs from the cats and dogs that make up the majority of her practice. “Some families I see have five or six dogs,” she says. “In Buckhead and Brookhaven, I see lots of pocket pets—rabbits, guinea pigs. I probably see more chickens in Decatur and Tucker, but Sandy Springs and Dunwoody are getting more.”

Along with the aforementioned parrot, Tobias keeps chickens, four cats and three dogs. One positive outcome of COVID: Her husband, Jim, has a new appreciation for the menagerie.

“He wasn’t a pet owner before we met,” she says. “But he’s enjoying them since he’s been home and gotten to know them.”