A two-part renovation in Kingswood is a family’s respite. 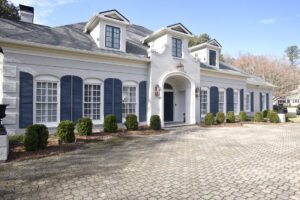 For Susan and Chad Carlisle, Kingswood off West Paces Ferry Road has always felt like “the” neighborhood. “We were drawn to the location; the large, flat yards; and streets with no through-traffic access,” says Susan, who is an independent consultant. “It’s an ideal neighborhood for families.”

But their dream house, built in the mid20th century, wasn’t ready-made. “We knew before putting in an offer that we wanted to make considerable changes,” Susan says. Enter Jenny Warner of J. Thomas Designs, whom the Carlisles have known for more than a decade. “We became fast friends, and I even worked for Jenny for a bit when I was between jobs,” Susan says.

The Carlisles trusted Warner to change up their first home in 2007, and the client designer relationship solidified from there. “There was no one else I would trust to work through a renovation,” Susan says.

Warner was in on the plans from the beginning. “Jenny made a few trips to the house before we closed to start the planning,” Susan says. The two decided on a fasterpaced renovation starting in 2019 rather than a slow one over time to keep the disruptions to living in the house to a minimum. “

If possible, I like to be involved from the beginning and do an architectural review,” says Warner. “It’s important for a designer to work alongside the architect because we know how a client is going to live inside the space being created. It is so much easier to tweak the space on paper!”

A fast-paced renovation turned out to be a great decision, considering the dramatic rise in raw material pricing, supply chain issues and access to qualified contractors, says Chad, an area vice president for tech company MongoDB. That meant that the family, including two kids aged 8 and 13, lived through the renovation, which was trying at times. They had to leave for a week for the hardwood floors to be finished, and the interior painting took longer than expected, which kept them out of the kitchen.

The home had one issue that was heartbreaking for everyone involved. “We finished a downstairs room before popping the roof up, and that room ended up needing a structural support beam,” says Chad. “That was painful. We ended up tearing into a wall that was already finished.”

Living through two phases paid off, though, as the family had their dream home in about 14 months. Phase one involved fresh paint and carpet, and planning and executing a new master suite. “We took the existing study and turned it into the master bath and took the existing recreational room and turned it into the master bedroom,” says Warner. A new vaulted ceiling and a “hers” closet were also added.

The couple also wanted to change the facade of the ranch house and add dormers, plus turn 1,800 square feet of attic space into a playroom, theatre, bedroom, bathroom and storage area. That required the architect, structural engineer and Warner’s collaboration.

Ultimately, even more was needed to accommodate the Carlisles’ lifestyle and tastes. The home didn’t have an office, for example. “It’s a sign of how work has changed between the prior owner and us,” says Chad. Also, the pool had no pool house. “We wanted a pool house where the kids could dry off outside of the main home, which spurred a vision to have a combination pool house, exercise room and steam room.” Phase two took about 10 months.

The Carlisles wanted each room to be distinct in the architecture and furnishings but have a layout that worked for the family. For example, they wanted a hallway to flow from the casual (a family room and kids’ jack-and jill bathroom) to the proper (a formal living room and dining room). “Not having an open floor plan was an advantage,” says Susan. Other functional and fun rooms, such as a kids’ bunk room with a slide and trap door, a laundry room with a working island and lockers, and a craft room and storage closet with a wrapping station, were added.

As for her furnishing process, Warner says, “First we make sure we can monogram it!” She looked for forgiving fabrics with lots of durability and pattern—”pattern hides a lot of flaws”— and relied on the family’s style and scale. “They have two young boys, and the furniture needs to stand up to being jumped on, made into forts and shields for Nerf gunfights, and sat on with damp clothes coming out of the pool,” says Warner, who also added new draperies, rugs, artwork and accent furniture.

It wasn’t completely all brand-new, though, as Warner likes to incorporate heirloom and sentimental pieces where she can. She reused Susan’s great-grandmother’s table and sideboard in the dining room. “We had the table raised to accommodate chairs of today’s size,” she explains. “We also removed the needlepoint chair covers that were hand-done by her great-grandmother and had them framed so they could be a cherished memory on display. They now hang in the family room.” The end host and hostess chairs were recovered and monogrammed. Custom drapes from the couple’s previous home were brought in, as were vintage lighting, fresh wallpaper and a new, scaled-up mirror.

The family trusts Warner implicitly thanks to their previous working relationship and friendship, and it shows in the design and in the details. “Jenny needed little—really no—direction. She can quickly render a drawing on the spot to provide options for layouts and ideas, and it never ceases to amaze me,” Susan says.