In her seminal essay A Room of One’s Own, Virginia Woolf wrote, “One cannot think well, love well, sleep well if one has not dined well.” I’m inclined to agree. Fortunately, at the first annual Masters of Food Wine and Golf Festival at the spectacular Mayakoba resort on Mexico’s Riviera Maya, dining really well was a given.

I’m lucky to say that it wasn’t my first trip to this terrific 1,600-acre eco-resort, tucked along the Caribbean Sea’s turquoise waters and extending back into the preserved mangrove jungle and winding waterways. The massive property is home to four distinct but connected hotels (Fairmont, Banyan Tree, Rosewood and the brand new Andaz), and I had the pleasure of staying at Rosewood Mayakoba three years ago. Naturally, I jumped at the chance to visit again, letting the allure of round the clock butler service, a sprawling two-story suite overlooking the sea and a private plunge pool unravel whatever pre-vacation knots of stress might linger.

The festival’s welcome dinner was set in a giant pavilion, close enough to the water that crashing waves provided ambient sound. Some of the world class chefs—including Brooklyn’s Filipe Donnelly, São Paulo’s Flavio Federico and Barcelona’s Montse Estruch, who has been awarded a Michelin star—prepared a four-course feast paired with delightful, Mexican-grown wines and festive tequila cocktails.

The next day, while golfers perspired through the first leg of the two-day, 36- hole stroke play combination, I made my way to an intimate, hands-on cooking class with Chef Wayu “Light” Wattanakamin at Banyan Tree’s Saffron Restaurant. He patiently taught six of my fellow non golfers the finer points of making Tom Yam Goong (spicy shrimp soup) and Pad Thai. Later, tucked in Rosewood’s Agave Azul restaurant, Chef Antonio de Livier from Mexicali presented his inventive take on modern Mexican street food. Each course was paired with either beer from local brewery Cerveza Akumal, smoky mezcal from Espíritu Lauro or wine from Adobe de Guadalupe in Baja California. From the first course of tuna ceviche with jicama and green apples to the final bites of pineapple carpaccio, candied serrano chilis and chaya mojito granité, the meal was a flavorful adventure that kept me intrigued.

Since I’m not a golfer (though the El Camaleón golf course, designed by PGA great Greg Norman, is stunning), I got to take advantage of spa services at the resort’s Sense spa. My deep tissue massage took place in a serene treatment room overlooking a cenote, for which the Yucatán is known. The Mayans believed that these subterranean freshwater pools were sacred. The massage (and probably all of the first-rate eating) left me completely blissed-out.

The final day, I took full advantage of the resort’s vast infinity pool with some of my other festival-goers. Fortuitously, I’d met Jose “Pepe” Hermosillo, the seventh generation maestro tequilero at the helm of the modern boutique tequila brand, Casa Noble, earlier in the week. When I bumped into him, he gave the bartender instructions on how to craft a cocktail using his own tequila, pineapple, fresh ginger and a spray of mezcal. The simultaneously sweet, smoky, spicy libation was the perfect complement to the golden sun, and several of the off-duty chefs raised a glass as well.

So often at glossy Caribbean resorts, cuisine feels like an afterthought, overshadowed by azure water, powder white sand, sea breezes and, let’s be honest, fruity cocktails. Having stayed at Mayakoba during non-festival time, I know food is a star attraction year-round. However, the addition of the Masters of Food Wine and Golf Festival was like icing on an already very well decorated cake. 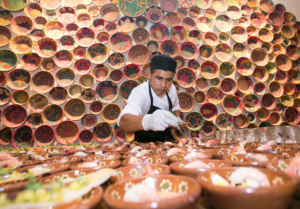 The second Annual Mayakoba Masters of Food Wine & Golf Festival is April 20-23, 2017. This year’s festival welcomes more than 15 celebrated chefs from around the world including Richard Sandoval, Abraham Sulum, Vivian Howard, Andrew Ormsby and others. Golfers can play alongside Mexican celebrity professional golfer Lorena Ochoa and Georgia-based pro Derek Oakey. Rates are from $1,299 per person, including golf, tasting events, parties and cooking classes.

FRACTIONS AND DECIMALS: OH MY!