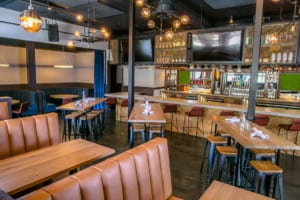 Big Sky Buckhead reminds me of the small-town eatery I used to waitress at years ago in my pre-college days. No staff member was a day over 25, everyone was unerringly cheerful and, because it was last century, they were all blissfully cellphone free. (It’s a testament to the management skills of Big Sky owners Adam Berlin and Juan Calle that I never once saw a staffer examining a personal device. On the contrary, they were consistently customer-focused.)

An exemplary and professional beyond their- years waitstaff is just part of the package here, though. Within Big Sky’s walls, designed to resemble a vacation ranch out west, there are many bright spots, and after multiple visits, a promising constellation of vision, concept and palate begins to manifest.

Big Sky has two levels joined by an exceptionally dark and rather vertiginous staircase. The first floor, where most of the action takes place, is all rustic, exposed beams and warm, earthy lighting. The cattle ranch decor contrasts with the blaring TVs (no matter where you sit, you can’t miss them), but I guess that’s the point of a sports bar. The upstairs has a similar Rocky Mountain feel but is typically restricted for special events such as trivia nights on Wednesdays and watching parties for high-profile sporting events.

On my first visit, my companion and I ordered a round of signature cocktails: the Dark and Stormy, a spicy homemade, ginger beer- based drink with lime and rum; and Rosemary’s Baby, a fruity, herbal concoction of Ketel One vodka, rosemary-infused simple syrup and grapefruit juice. It was a source of amusement that our waitress was so young she didn’t have a clue where the latter’s name originated. “Polanski? Mia who?”

Our Texas margarita on visit number two wasn’t exactly served up in a 10-gallon hat (more like a 12-ounce rocks glass), but darned if it wasn’t the finest comingling of lime and tequila this critic has tasted in ages. Made with Frida Kahlo Reposado tequila, triple sec and housemade sour, it was salt-rimmed liquid gold—slightly viscous, nicely tart and perfectly chilled.

As we reviewed the menu, we watched as folks trickled in for trivia night. The 20- somethings embraced one another with genuine affection, ordered up a bowl of fragrant chile-dusted popcorn, a respectable charcuterie and cheese board, and a round of craft beers (think Sweetwater and Terrapin) before huddling up for some pregame gab.

Ever-punctilious chef Luis Damian did have a few misses that night. The Brussels sprouts, promised “crispy,” were actually blackened. The Mojo Chicken Bowl, advertised as a “healthy choice,” came with a moist and beautifully bronzed half chicken, but the breast was salty and the drumstick under-seasoned. Thankfully, the sides were a delight (if somewhat generic), especially the silky adobo black beans and crispy hot broccoli with chopped garlic and shallots. The Tres Tacos, a deal at three for $11, fared well, too. Of the four on offer, we chose the Buffalo-sauced chicken, the fried shrimp with chipotle aioli and the Americana, consisting of guajillo-marinated ground beef with veggies and cilantro. The tapioca flour coating used to crisp the shrimp and chicken combined with the chiles’ heat and creamy sauces scored a home run.

Visit number three presented an opportunity to check out the much-heralded weekend brunch. We resisted the $16 bottomless mimosas, which would have made driving home a challenge, but luckily scored a second-floor patio table with a view of Buckhead’s growing West Village. There are many fine menu choices at brunch, from the Fried Chicken Benedict to the Chorizo Breakfast Tacos. We opted for the Big Sky’s Original Burger, consisting of ground chuck seasoned with a secret adobo blend and served with onion marmalade, melted cheddar and smoky bacon, all on a Holeman and Finch bun.

And I don’t care how unhealthy they are, don’t pass on the hand-cut, skin-on French fries. The Buffalo Chicken Sandwich was a Southern masterpiece as well—crunchy, ginger-buttermilk marinated chicken strips coated in Buffalo sauce, a splash of buttermilk ranch and a side of addictive, chile-tinged sweet potato tots. It was a good 24 hours before we needed to, or wanted to, eat again.