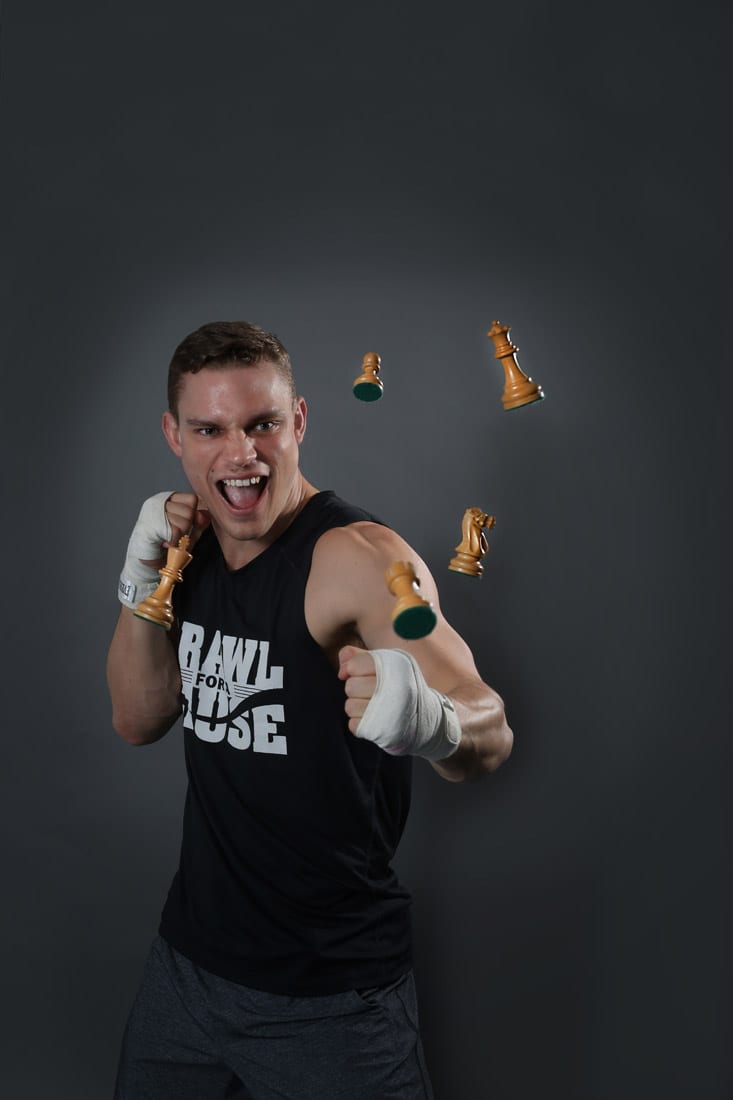 If marrying chess and boxing seems a little whacky, Thomas argues the two make a perfect match because both are about controlling movement and space. “If you control the center of the board in chess, that’s like controlling the center of the boxing ring,” he says. “That allows you to control the pace of the match and dictate your opponent’s moves.” Thomas compares pawns to blocks, rooks to uppercuts, knights to hooks and the all-powerful queen to the mighty jab. “All of these may sound like forced parallels, but I think the psychology is sound,” he says.

The idea of chess boxing first appeared in a 1992 French graphic novel. Though the sport hasn’t taken hold in the U.S. (a fact Thomas hopes to change), it has in other parts of the world, including Russia, Germany and India, where Thomas won the 90-kilogram (198-pound) division at the 2018 Chessboxing Amateur World Championship last July.

Thomas himself had never heard of chess boxing until a few years ago. He was recovering from shoulder surgery to fix a boxing injury and happened upon a video of a match on YouTube. “It found me at my most vulnerable. It felt like my destiny,” says the 28-year-old. He knew he had the boxing part down—he grew up just outside Philadelphia with that iconic Rocky poster over his crib. After taking a $2 boxing class as an undergrad at the University of Georgia, he became obsessed. “Boxing became my hobby and my passion,” he says. He’s channeled that passion into his Buckhead-based nonprofit, Brawl for a Cause, which puts on Vegas-style charity boxing events. The boxers are everyday folks who train for eight weeks while raising money for a cause of their choice. In 2018, the Brawl for a Cause event held at Mercedes-Benz Stadium raised more than $200,000 for 30 charities. Another black-tie event is scheduled to take place at the Georgia World Congress Center on April 6.

Even though Thomas had played chess competitively as a kid, he had to get better to compete on the world stage. He reached out to Carlos Perdomo, the founder of Chess Atlanta, who let him train with his students. “That first day, I got manhandled by 8- to 12-year-olds. I didn’t win a match,” says Thomas. “I went home and sobbed.” Then he thought about the hundreds of people who have participated in Brawl for a Cause. “A lot of them overcame their fear and doubt,” he says. “So it was time for me to talk the talk, walk the walk and fight the fight. I went back the next day.”

It’s a good thing. It was Thomas’ moves on the chess board that allowed him to prevail at the world championships against a formidable opponent—the boxing coach of the India team who was being cheered on by hundreds of his countrymen. Thomas could count the Americans in his corner, himself included, on one hand. “It was the craziest thing that has ever happened in my life,” he says. “It felt like Rocky IV.”