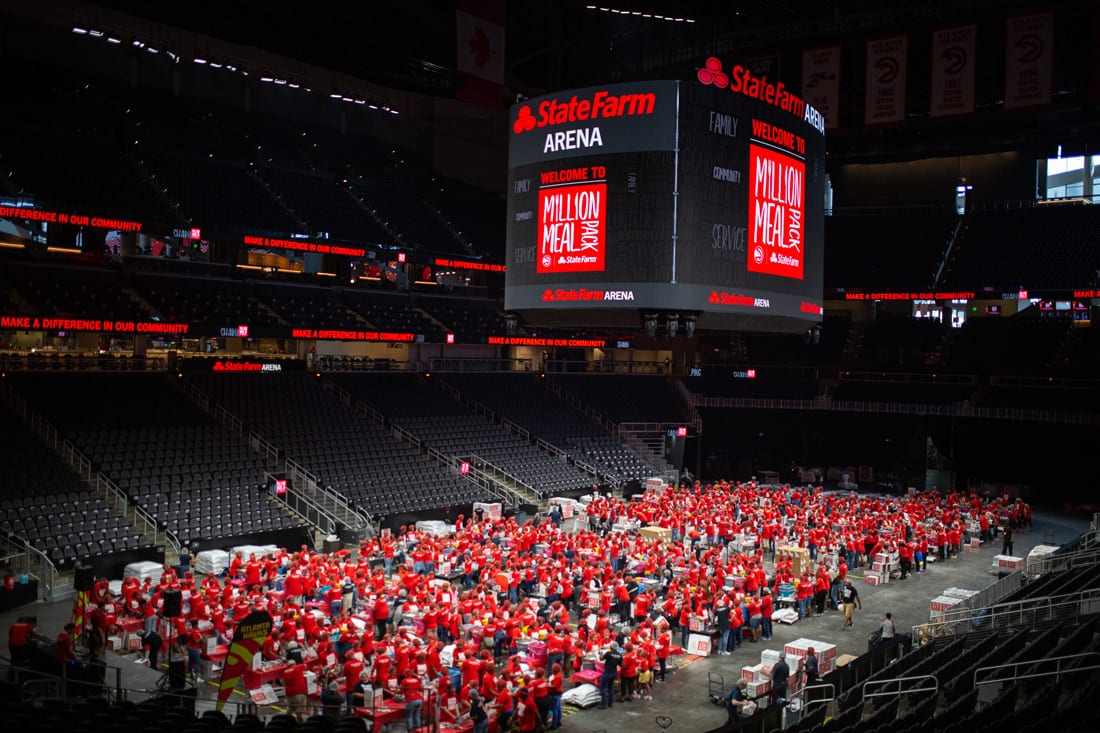 “The mission of the Hawks Foundation is to do small acts that make a big impact on the community,” says Andrea Carter, the team’s vice president of corporate responsibility and inclusion. “But we were looking for a bigger way to draw in community participation that would make a difference in the lives of a large number of people. With help from Feeding Children Everywhere, we came up with the Million Meal Pack, then put out a call to our fans, season ticket holders, religious groups, corporations and the community via e-mail and social media. Everyone thought it would take two to three months to get to our goal of 5,000 volunteers, but 72 hours later, we had reached capacity.”

Feeding Children Everywhere served as the logistics lead for the event and handled everything from training to distribution by local feed-the-hungry groups. The Atlanta Community Food Bank, Second Helpings Atlanta, Fountain of Hope, Goodr, Lost-n-Found Youth and Veterans Empowerment Organization of Georgia picked up and delivered the more than one million food packages to organizations and shelters that regularly feed the hungry.

Although this was the Atlanta Hawks Foundation’s largest event ever, it is hardly the organization’s only philanthropic effort. “In partnership with State Farm’s Good Neighbor Clubs, we pledged to build 25 basketball courts and activity spaces beginning in 2015,” says Andrea Carter. “We exceeded that goal in just four years and have thus far completed 27 safe, fun places for teens to go after school.” Carter says they also built a dance studio with space for activities such as yoga that was scheduled to open in December.

In addition, the Hawks Foundation provides scholarships to basketball camps and clinics, and is developing a high-level instruction course for volunteer coaches. It also offers mentoring, teaches leadership skills and provides free tickets, transportation and food so teens can attend Hawks games.

TURN UP THE HEAT

Where Are They Now?