These enterprising teens, along with their older sister, tackled raising money for cancer rehabilitation in honor of their mother. 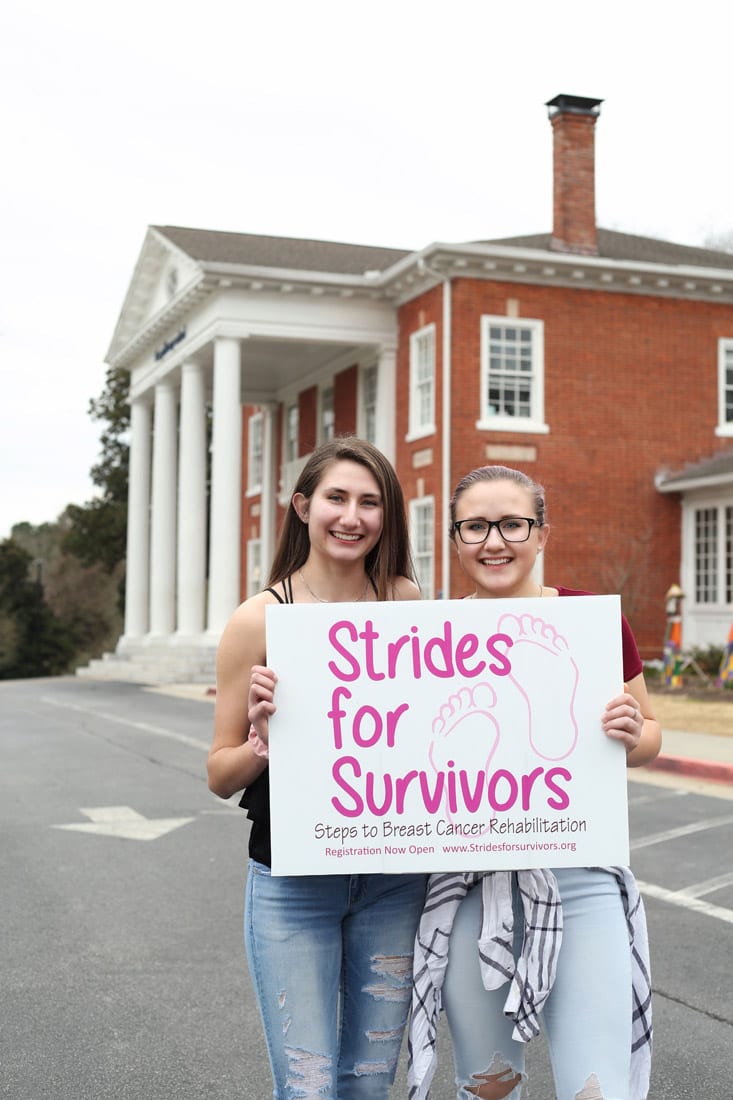 When Stephanie Scalise was diagnosed with breast cancer, the news hit her daughters, Samantha, Lauren and Emilie, particularly hard. Ages 15, 13 and 11 at the time, the three Galloway School students were all too aware of the ferocity of the disease.

They knew life for their mom would be difficult during surgery, chemotherapy and radiation. But what they didn’t expect was that it would be equally hard in the months following her treatments. Their outgoing mom became withdrawn and was in a lot of pain from the edema and cording (thick, ropelike structures that develop under the inner arm) that were side effects from her double mastectomy and lymph node surgery. Then she began going to TurningPoint Breast Cancer Rehabilitation in Sandy Springs. The 15-year-old organization helps survivors via a myriad of services including physical and massage therapy, counseling and exercise.

“TurningPoint gave us our mom back,” says Lauren. “We were so grateful, we wanted to give back with something more significant than baking cookies.” So sitting around the dinner table one night, the girls tossed around some ideas and decided to stage a 2.7-mile walk around the Chastain Park PATH so that families with young kids could participate together. They named their charitable walk Strides for Survivors and pledged all of the proceeds to TurningPoint. One of their biggest hurdles was getting permits from the city for the walk, an issue the teens hadn’t anticipated. “It wasn’t easy,” says Emilie. “We needed a lot more legal stuff than we ever imagined. Mom helped get everything we needed and brought a lot of the pieces together.” Samantha, now a freshman at the University of Tennessee, became the public face, handled the advertising and tried to find sponsors. Lauren and Emilie worked behind the scenes making posters and garnering donations for a silent auction and raffle, as well as developing a website (stridesforsurvivors.org). They put up posters at school and in the Buckhead area surrounding Chastain Park, a favorite hangout for the teens. The park was also the site of Stephanie’s daily exercise as she walked her way to recovery.

For the first Strides for Survivors in 2017, they expected about 20 participants, mostly friends and people from TurningPoint. Instead, the walk attracted about 100 participants and raised $6,220.

The girls were stunned and thrilled. They immediately began planning for the 2018 walk with the addition of a T-shirt sale, an expanded silent auction and a raffle that included handpainted items by Lauren. They also landed some major corporate sponsors and scores of volunteers. The 2018 event attracted more than 200 walkers and raised $10,000. “Donating the money to TurningPoint was the best feeling ever,” says Emilie.

For their outstanding efforts, all three girls were named to Atlanta InTown’s “20 Under 20,” and their mother received the Braves’ 2017 Diamond of Hope Award for her contributions to the community.

The teens had a turn of bad luck this year. “The only date that Galloway [where the walk starts and finishes] had available for us to stage the walk was on Super Bowl Sunday,” says Emilie. “We were literally just a few miles down the road from one of the world’s biggest sporting events. We had hoped to raise $15,000, but only raised $9,000.”

Undaunted by this year’s low turnout, the girls are already at work on 2020’s walk, with plans to get even more sponsors and to sell gift baskets along with the raffle and silent auction items. “We’re in awe at all of the community support and with what we’ve been able to do,” says Lauren. “Mom’s illness could have driven us apart. Instead it brought us all even closer together.”