Is It Time To Consider I Bonds

Dr. Tara Rittle thought she wanted a new cat. Little did she know, when she adopted a black and white tuxedo kitten, she would also be getting a medical mystery reality show. “It was like an episode of ‘House,’” remembers the Peachtree Hills Animal Hospital vet.

“Dimi” is part of an exotic family of pets that includes another cat named Gus; Wizard, a hairless Chinese Crested dog; two tortoises, Mortimer and Frank; and a leopard gecko named Bloke.

“Adopting exotic animals is simply a byproduct of where I went to vet school,” Rittle shares, remembering fondly her days at the University of Florida’s College of Veterinary and Zoological Medicine.

But even with this colorful array of different pets it’s 9-year-old Dimitri who steals the spotlight. 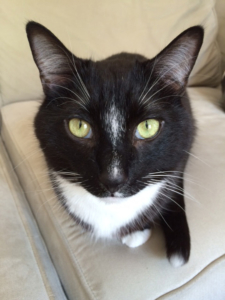 And it’s Dimi who stumped Rittle when he started passing out a few years ago.

“I was at work at a clinic in Acworth,” Rittle remembers, “when my husband at the time called me in a panic about Dimi. I told him to rush him to my friend who was a vet at an intown clinic.”

A few hours after arriving at that clinic, Dimi was fine, though the vet couldn’t figure out what had gone wrong.

“We figured maybe it was a one-time thing,” Rittle says. “Until it happened again a few days later, and then again.”

After several episodes of Dimi’s passing out, Rittle’s then husband discovered a big clue.

“He saw Dimi vomit right before he passed out,” Rittle says. “Part of the mystery was solved. Some cats, even some people, have something called vasovagal syncope where the body overreacts to some sort of trigger. In Dimi’s case, just the act of vomiting was making him pass out.”

Luckily, Dimi presented another clue to as to what was making him sick. “Not to be gross, but my then husband found a big clump in what Dimi gave back. It looked a lot like the new carpet in our dining room.”

Sure enough, a close examination of the dining room carpet showed a frayed area where Dimi had been chewing. It was clear the new carpet had to go.

“We had to re-do the dining room and put in a new sub-floor and hardwood floors.” Dimi the barn kitten became one expensive cat. “He’s the reason we found out what so many pet owners know. We can’t have nice things, but we have one awesome cat.”

THE PRICE TO KEEP PRECIOUS PURRING