How an “onerous burden” became a jewel in the city’s landscape.

Lifelong Buckhead native Beauchamp Carr believes Atlanta has a distinctive philosophy that harks back to the legacy of the Coca-Cola Woodruffs and their dedication to giving back to the community. “There’s an ethic in Atlanta leadership to do good work and not look for credit that Mr. Woodruff inspired,” Carr says. “That spirit has animated a lot of good causes around the city.”

Forty years ago, Carr and a group of preservation-minded friends put that ethic into action when they spearheaded the campaign to save the Fox Theatre from the bulldozer. Atlanta, a city with a penchant for tearing down the old and historic to make way for the just about anything else, was about to lose the Egyptian and Moorish-inspired movie palace to neighboring AT&T, then Southern Bell, who was eyeing the prime site on Peachtree Street for a new office building.

Carr, now 70, had just left a job at Citizens & Southern Bank (now Bank of America). “I was available for something exciting, and this came along,” he recalls. “At the time, it seemed like an onerous burden, but it was also a marvelous opportunity. And I felt a connection: I grew up going to the Fox. When I was 10, I used to get on the old Atlanta transit system bus and ride down to Midtown to see the movies.” 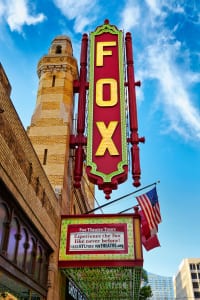 The theater’s owners had been losing money steadily for years and were open to selling. “They were talking to anybody who might buy it,” Carr says. “But when it came out that Southern Bell was going to tear it down, people rose up. They wrote ‘Save the Fox’ and ‘How can you do this?’ on their phone bills. What looked like a great deal was a public relations nightmare.”

The clamor engendered a feasibility study that determined the Fox could have a future in the right hands. Carr and a group of fellow volunteers formed a nonprofit to oversee a fund drive and begin booking acts to bring in revenue. Through what Carr describes only as “a complicated real estate deal,” the newly formed Atlanta Landmarks team took over the space with a $1.8 million mortgage.

“Everyone thought we’d fall flat on our faces, but public opinion was so strong on our side,” Carr says. “Still, if we missed one interest payment, the building would revert to the former owners, who could demolish it. We all had to sign an agreement that if we failed, we’d no longer protest the demolition.”

Those who remember driving down Peachtree during the “Save the Fox” campaign may recall volunteers in the street collecting change for the cause. Others may have fond memories of dancing in the balcony to a raucous rock band. For his part, Carr was paying calls on every foundation, corporation and philanthropist in town, begging for money.

“That was my role,” he says with a laugh. “When our first big interest payment—$ 100,000—was due, I got on my knees in front of people who had resources. It worked; our first major foundation grant came from the Woodward Fund. The Delta Zeta sorority held a gala to raise money. One day, Ben Massell Jr., (of the Massell Realty Company) walked in and wrote a check for $5,000. A week later, I got a call from a lawyer whose client wanted to make a $400,000 gift conditional on our raising all the money. But we also had thousands of small gifts from ordinary people.”

The gala celebration to mark the final mortgage payment was held on Easter Sunday in 1975. The Fox’s 4,400 seats were packed by ecstatic supporters who roared their delight when the Mighty Möller organ rose from the orchestra pit to the strains of “Easter Parade.”

After the campaign, Carr put his fundraising skills to use for the Woodruff Arts Center, where he worked for 35 years. He raised four children, got involved with the work of the Atlanta Preservation Center and continues to sit on the Atlanta Landmarks board.

“It was great fun—and it still is,” Carr says. “But it came from our little group just wanting to do something good for the community.”

Party like it’s 1975
Two celebrations are planned to mark the 40th anniversary of the Save the Fox campaign. On March 14, the Georgia Trust for Historic Preservation is sponsoring a ticketed gala for members of the Trust or Friends of the Fox. On June 7, a free block party for the public will feature afternoon and evening concerts.
Find more details at foxtheatre.org

A side of Sal

To Russia, with love