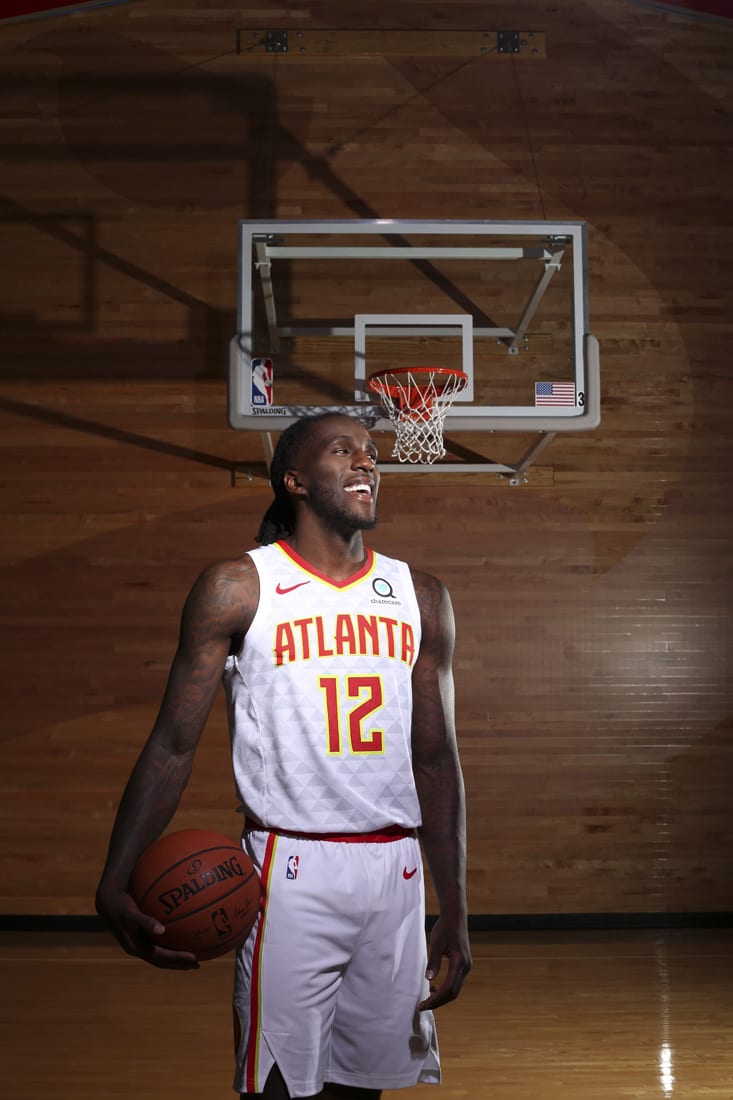 When asked his most vivid memory of the day he was drafted by the Utah Jazz back in 2016, 24-year-old Taurean Prince says it was the satisfaction of being a guy whom everyone thought was supposed to go late in the first round, but who went 12th overall instead. (He was soon traded to the Atlanta Hawks as part of a three-team deal.) That might have been a surprise to some, but the fact Prince made it to the NBA at all could be considered shocking as well. When Prince was 12, his parents divorced, and the Texas native opted to live with his dad. Not long after, Prince’s father lost their house and they were homeless, living at the Salvation Army, crashing on people’s couches or, on a few occasions, sleeping outside.

Now about to start his third year with the Hawks, Prince, who lives in Brookhaven, says that period was actually a blessing. Being so young, he could have easily given up, gotten discouraged or ended up on the wrong side of the law, but he insists it taught him to be grateful and also gave him a strong work ethic. “I don’t ever want to go back to that, which is why I work so hard,” says Prince.

His efforts are paying off, as the 6-foot, 8-inch small forward was chosen to play in the Rising Stars Challenge at the NBA All-Star Game in February. “Just knowing you’re a part of a team that not everyone can be a part of, it’s a special moment,” says Prince. “It was a great milestone in my career.” Now Prince must navigate the challenges as the Hawks continue to rebuild, having acquired both a new general manager last year and a new coach this spring.

What do you think of your new coach, Lloyd Pierce, so far?

He’s more of a people person. He expresses how he feels and takes on the challenge of speaking to you himself. He doesn’t send someone else to get his point across. He’s also very active. He works out with us and wants to be in every drill. I think he’s changing the culture a lot.

What are your hopes for the team this season?

To just continue to get better as an organization overall, all the way down from the front office to the players. I think that since we’ve made so many switches, it’s really set the culture up to be what we want it to be. We’ll continue to chip away at it now that we have our new GM, Travis [Schlenk]. I believe it’s one of his first times being a GM, and it’s the first time our coach has been a head coach, so everybody’s just trying to figure it out. Everyone has to figure out their roles and take advantage of them as best as possible.

What are your personal goals for this season?

Just being able to continue to play, being healthy and able to express my talents. And to progress. I’m all about progression.

In 5 years, I should be an all-star. In 10 years, I should have a championship or two. In 15 years, hopefully, I’m still in the league. But if not, then definitely trying to make a difference for the young guys and helping them to get into the league.

You’re still young, but do you ever have thoughts about what you’ll do after you retire from the game?

To be honest, I don’t really think about it. I feel like if I think about that, it will take away from the situation I’m in now. I’ll definitely be prepared for it when it does come, but right now I’m just focused on basketball.

Who’s your favorite basketball player of all time?

Tracy McGrady. It’s the way he shot the ball. He was also one of the most athletic and overall most impactful players of his time.

What was the first big purchase you made when you signed your NBA contract?

PS4. I’m pretty solid at Fortnite and really good at Call of Duty.

What are you binge watching right now?

Power. It’s a Starz series about a man trying to balance being a [drug] kingpin and having a family.