A family of seven make their home dreams come true in a renovated 1920s dwelling in Ardmore Park. 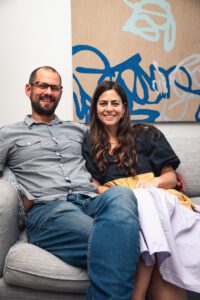 When Mary Stuart Iverson first entered her Ardmore Park home in 2013, she was awed. As a realtor, she’d seen many impressive residences, but something about this one spoke to her. “When I walked in the door, I just started crying. I could just see our family here,” she says of the 1928 stucco residence.

At the time, Mary Stuart and husband Joel Iverson, co-founder of Monday Night Brewing, lived in a 1,600-square-foot home in Berkeley Park. They had two boys with another on the way and needed more space. They soon became the third owners of the aforementioned two-story abode, which had hosted campaign parties for Jimmy Carter and benefits for the Atlanta Symphony Orchestra during its storied lifetime.

While Mary Stuart fell head over heels for the dwelling, the outdated interior needed work. Before the Iversons moved in, the property underwent a four-month renovation that replaced the orange shag carpet with hardwood floors, updated the kitchen and mudroom, and reconfigured the upstairs bedrooms to have larger closets and updated bathrooms. A few years later, after expanding from three boys to four, the Iversons enlisted Lucas Tilton Residential for a much larger overhaul, doubling the square footage to 6,360.

“My husband said he didn’t ever want to live anywhere else. We’re conveniently located for both our jobs; we love the yard; we love the BeltLine at the end of the street and the walkability to Peachtree,” Mary Stuart says. “I said, ‘We need more than three bedrooms, so let’s add on.’”

From June 2018 to June 2019, the Iversons lived in a rental so their home could be expanded. On the first floor, they added an open kitchen and living space as well as a guest bedroom where members of Joel’s large family (he is one of nine kids) stay while visiting. The main level also boasts a backyard entry foyer and mudroom custom- designed for the family, which added another boy to the family tree in 2019.

“When we moved back in, I was pregnant with my fifth. We weren’t expecting a fifth, so we are short on lockers and have only four bar stools in the kitchen,” Mary Stuart says. “I just share a locker with the baby.”

Built by Costelli, the mudroom’s six locker-room-style cabinets have shoe drawers and ventilation holes arranged in a star design that Mary Stuart drew. She also included a shelf in each locker with an electrical outlet to charge devices.

“I hate screens, so they have to drop their screens when they get home from school and charge them,” Mary Stuart says. “The boys can keep all their junk in here so I don’t have to look at it.”

The rest of the boys’ stuff overflows into the two-level playroom on the home’s second floor, also part of the most recent renovation. High ceilings accommodate a “Lego loft” overlooking the lounge space below. On family movie nights, a large projection screen descends strategically over a built-in bookshelf.

“We don’t have a TV; we only have a projection screen,” Mary Stuart says. “We want our kids to be playing outside and using their imaginations as much as possible, so we don’t do screens during the week.”

With a trampoline, in-progress treehouse and landscaping by Thorn Garden, it’s easy to get the family outdoors. The patio of FireRock pavers features an Elegant Earth table that doubles as a ping-pong court and a cooking space with a Big Green Egg, a kegerator with three taps (pouring beer, homemade kombucha and sparkling water) and two Ooni pizza ovens. “The outdoor space was something I spent the most time obsessing about. From the hardscaping and artificial turf, which sees lots of wrestling, and outdoor kitchen with poured concrete countertops, it’s built for both resilience and fun,” says Joel.

The two-tiered backyard also has a detached garage and au pair suite (added in second renovation) and a custom hot plunge pool or “onsen” inspired by Joel’s childhood in Japan. The fast-warming water feature and the nearby outdoor shower are used by the family year-round.

While the backyard is home to most of Joel’s favorite amenities, Mary Stuart is particularly fond of her two dishwashers, spacious laundry room and master suite.

In the master bedroom, high ceilings rise above a custom powder blue velvet upholstered bed and leather and Lucite bench. Off to the side is Mary Stuart’s home office, painted in Farrow & Ball Green Blue No. 84 and furnished in a high-glossed Chinese campaigner desk that belonged to her grandmother. Across the room is the swoon-worthy master bathroom with black-and-white tile, a shower with a glass and iron door and window, and stand-alone tub strategically placed for the view. “South-facing houses are really important to me for the natural light. This house faces south, and we have a city view. At night, I love seeing the Midtown buildings, especially in the winter,” Mary Stuart says.

Through the bathroom are the couples’ his and her closets. Joel’s section is barely filled with his casual collection of clothing, and Mary Stuart’s features chandeliers originally in the front entrance hall, a custom palm window treatment and displays for her shoes and handbags.

“I chose the smaller closet because it was more private. With all the boys, I wanted my own space,” Mary Stuart says. With the help of Virginia Cheek Designs, the lady of the house also claimed her stake by infusing a light Mediterranean-style decor into the interior inspired by her time spent with her grandmother in West Palm Beach. “I want my house to feel like a vacation home,” she says.

The kitchen showcases Bianco Rhino marble countertops, warm white oak cabinets and a stucco hood mirroring the façade of the fireplace. Facing the hearth is a sofa from her grandmother’s house and two chairs Mary Stuart salvaged from a model condo.

The living area also boasts a wet bar with antiqued mirror backsplash, blue leather cabinets to match the kitchen barstools and a Ferguson brass sink with a custom decorative brass dowel. “I saw a picture of an old Italian sink that had the brass dowel detail and got a [craftsman] to make it to match,” Mary Stuart says. The living area offers three casual eating areas, but more upscale meals take place in the dining room, located in the original footprint. The home’s 93-year-old wing also includes a formal living room and Joel’s office, an alcove painted in Pratt & Lambert’s Obsidian with a “secret” bookcase door that opens into a storage closet (formerly a hard-to-reach powder room).

After living in their renovated home for more than two years, Mary Stuart is as passionate about it as ever. Her only regret is a minor one.

“We love our home and are so thankful we were able to add on before COVID hit,” Mary Stuart says. “The only thing I would change is adding a second washer and dryer for the crazy amounts of laundry we go through daily.” 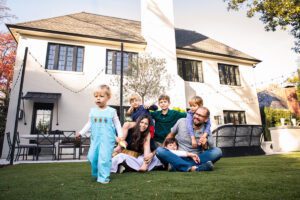 1. Having a great line of sight is important. Think about how you will watch little kids from the grilling area or where adults are spending time, making sure spaces are handicap accessible and hiding the junk. No one likes to entertain outside and have to stare at the trash and recycling bins!

2. Use the trees! There is nothing more romantic than having a chandelier hanging from a tree for al fresco dining. Or hang a swing for some family fun under a tree. We were sad to cut down a large tree to build our garage. We saved a 10-foot section and are using it as the base of our sons’ tree house.

3. Consider your lighting. Lighting is such an important tool for entertaining. Make sure you have good lighting for evening activities, whether that is a string of party lights, landscape lighting or the glow from an outdoor fireplace.

HOW TO CREATE A PICTURE GALLERY

OUT OF THE BOX