In the 1950s and ’60s, denim went from the symbol of cowboys and workmen to everyday fashion. In recent years, athletic attire has undergone a similar transformation. Affectionately dubbed “athleisure,” workout wear is no longer reserved for the gym. Instead, men and women alike are embracing the trend of embellished sneakers, leggings and tanks for weekends, wandering and work-from-home days.

“Athleisure has become popular because we are able to make it cross over from fitness to fashion seamlessly,” says Donna Burke, founder of Forme Studios, a virtual exercise platform. In fact, the athleisure market is expected to reach $257.1 billion by 2026, up from $155.2 billion in 2019, according to Allied Market Research. Brands such as Athleta, Lululemon and Allbirds have become status symbols as consumers espouse their clothing for equal parts comfort and style. Even luxury powerhouses Fendi and Tory Burch have joined the game.

“It’s not just about comfort; the ability to have a cohesive wardrobe also saves money while looking and feeling your best,” Burke says. We spoke to three local fitness pros for the inside track on their must-have athleisure picks for optimal functionality and fashion. 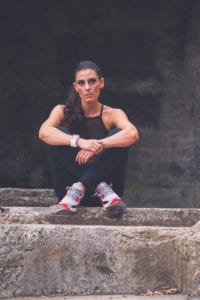 A former marine biologist who spent a great deal of time hiking and scuba diving, Bri Sexton joined Blast, a treadmill and weight-based group training company, as director of fitness in 2010. Based at the Buckhead location, Sexton serves as a partner in the business as well as chief product officer.

“Athleisure is so mainstream now because more people are making fitness a part of their everyday routine,” she says. “Society tends to put more focus on how you feel rather than how you look, and athleisure capitalizes on that perfectly.”

She describes her style as “West Coast chill with a splash of rock.” You can usually find her sporting Spanx leggings and something from Aviator Nation’s 5 Stripe collection.

“Spanx has the most versatile and flattering leggings that can transition from gym to happy hour. I love how you can dress them up or down,” she says. “Aviator Nation’s [clothes] are super soft with retro surfer vibes.”

Sexton is also a big fan of Beyond Yoga leggings and sports bras for their “timeless patterns, super quality material and compression that doesn’t wear out over time.” She’s happy to report that the leggings are opaque, so you don’t have to worry about giving a show while doing deadlifts! 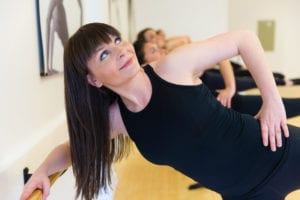 She appreciates athleisure for its multi-function. Pre-pandemic, she often wore her workout clothes to brunch after class as part of her Forme Social Club.

“Beach Riot’s Sport Riot line has the best high-waisted pants in the game right now, and their embellished leggings are flawless,” Burke says. “My favorite are the Piper legging and the Bowie top. The Bowie top looks revealing, but it’s not! They also have great end of- season sales for girls on a budget!”

“It always looks chic. I love the lightweight fabrics [of the Rise Compression tight] for a hot power flow,” she says.

She advises sizing down in the bottoms and styling the final look with the cropped Rise Zip Up jacket. 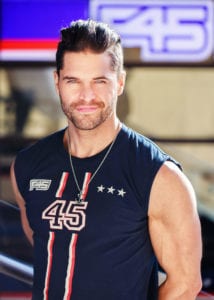 A group trainer at F45 Training Buckhead, Morgan Findlay is an actor, model and two-time All- American rugby player. Born and raised in New Zealand, Findlay moved to the United States in 2008 to teach snow- and waterskiing. He earned his MBA and founded Peachy Cheeks Fitness, a digital health and wellness platform. He’s known around the city for his Workout Wednesday tips and tricks on Good Day Atlanta.

“I tend to change my style depending on my mood and my clientele,” he says.

He leans toward Lululemon Surge Training Shorts for their secure phone pouch and zipperless back pocket. “The inner liner offers crazy comfortability. They’re as soft and short as rugby shorts,” he says.

He pairs them with Lululemon’s Always Agile sweat-wicking tank made with four-way stretch. “You can dress it up or down, and it’s always nice to see quotes of encouragement on the hem.”

To complete the look, Findlay ties on his Allbirds Tree Runners and tops his head with a snapback hat “to keep the mane in order.” He prefers Allbirds, he says, because they’re made from sustainable materials in his home country and are machine washable.