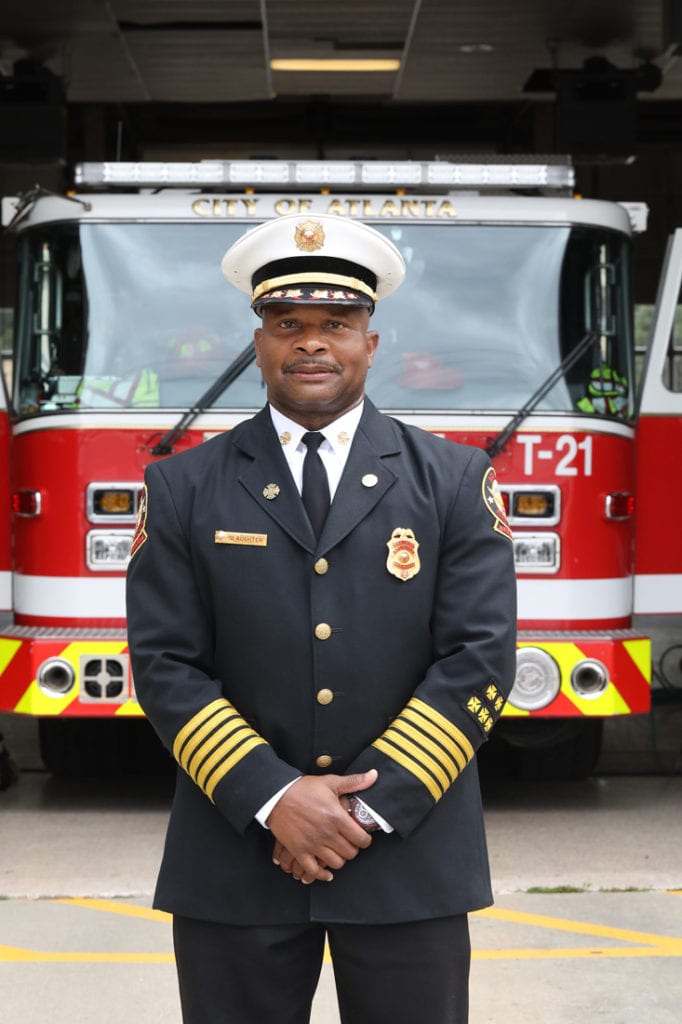 In childhood imaginings, the lure of a big red truck, flashing lights and loud sirens has some kids dreaming of becoming a firefighter. Atlanta Fire Chief Randall B. Slaughter entertained no such notion. The first time he gave any real thought to his occupation of the past 30 years he was fresh off active duty in the U.S. Marines, tagging along with a buddy seeking work at the fire department.

“I remember going to Courtland Street, where the headquarters used to be, and the line was four to five blocks long. We waited 3 ½ hours. I had no intent on applying, but then I thought I might as well, so I signed up, too. They called me, not him,” he recounts with a chuckle, quickly adding that his chagrined friend got a job with the Atlanta Police Department.

The stars aligned. Since joining the Atlanta Fire Rescue Department in November 1990, Slaughter, 51, has served in each division of labor and every rank within the organization, culminating with his leadership of the force in 2018. It’s a big job, with 1,144 paid positions, a $110 million budget and a 135-square-mile coverage area, serving more than 519,000 residents. It’s not only a testament to his civic allegiance but a feat that’s virtually unprecedented—one that makes him a hot commodity on the fire chief circuit and a superhero to constituents and the community at large.

“During my tenure, I have led the department through a series of very significant events, from hosting Super Bowl LIII and Fire Rescue International to this summer’s protests and riots and the continuing global pandemic,” he says. “I have been thoroughly tested as a fire chief.”

He spent his first few years as a firefighter and EMT, and was fortunate to have escaped serious injury, other than a fractured arm from a falling board and singed ears from battling flames without his protective hood. He forgot it that day and didn’t want to tell his captain, who found out anyway after seeing Slaughter’s blistered ears.

“When you’re young and straight out of the Marines, situations we should have been scared about, we weren’t. Roofs would collapse. We’d get out on the porch and 20 seconds later the front of the house would fall in,” says Slaughter. “My challenge as fire chief now is to try and protect [my team] and manage the risk to their lives, whether they want me to or not.”

As he climbed the ladder, he learned the ropes in each of the department’s six divisions, from Field Operations, which constitutes up to 90% of the department’s work force, to Airport Fire, the largest in the world, with five dedicated stations at Hartsfield-Jackson Atlanta International Airport.

He completed a bachelor’s degree in Policy Studies at Georgia State University, followed by a master’s in Public Administration from Columbus State University. He also graduated from the National Fire Academy’s four-year Executive Fire Officer Program, a coveted designation.

While the pandemic has been challenging with the possibility of quarantine threatening an already short staff, he says the men and women of AFRD have done an exemplary job. “They are a resilient bunch, giving citizens and each other 200%. There’s a different kind of courage required now.”

Slaughter has called Atlanta home since the age of 6. He and his wife Katrina are the proud parents of two sons (the oldest is in the Air Force, and the youngest joined him at AFRD in 2017). He supports the community through membership in Omega Psi Phi Fraternity Inc., serves on the board of the Georgia Firefighters Burn Foundation and is a graduate of Leadership Atlanta 2020.