The first time I skied I was 4 years old. With each family ski vacation, I fell more and more in love with the sport. Even when we lived in Florida, far from the mountains, my parents planned trips to far flung, snow-capped destinations so we could further hone our skills. Now that my kids are of the age to tackle the peaks (albeit the small ones), I’m eager to pass on my love of the sport. A family ski vacation, however, is by no means an easy or inexpensive trip. So last winter, when I was yearning to see my babies become snow bunnies, I pinpointed a close-to-Atlanta mountain to give them a taste. Our destination: Boone, North Carolina.

Named for Daniel Boone, the famous American pioneer and explorer, Boone is situated in the Blue Ridge Mountains, a scenic five-hour drive from Buckhead. Its location makes it easily accessible from numerous big cities. As such, we convinced friends who live in the D.C. area to drive down and meet us, and we all packed into a quaint cabin rental ready for an adventure-filled, yet relaxing, stay. 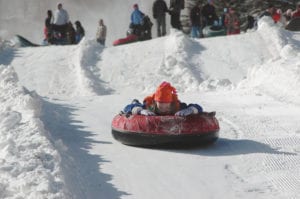 I’ll be honest: As a self-proclaimed ski snob who’s accustomed to higher altitudes, I didn’t expect much in terms of high-quality powder. I figured this trip would give our kids—ages 2 to 5—the opportunity to see some of the white stuff and try out the bunny slope with friends. We booked them private lessons with the French Swiss Ski College and, after gearing up, made our way to Appalachian Ski Mountain in Blowing Rock, about a 15-minute drive south from downtown Boone.

Our ski day was more of a rain day, but the snow machines at the resort were pumping to ensure there was enough of a base to make a trip down the mountain safe and exciting. All the nearby ski mountains make their own snow, but Appalachian Mountain Resort claims the greatest snowmaking pumping capacity per acre of any resort in the Southeast.

We dressed the little ones in their layers, and, after getting a rundown from the instructor on what to expect, we unleashed them on the mountain and found an outdoor deck at the base to watch from. They ran through age-appropriate drills and eventually made their way up the small slope on the moving walkway or “magic carpet.” We braced for their descent. It’s hard to explain the satisfaction a parent feels seeing her children succeed at something they’ve worked toward; watching our kids head down the bunny slope successfully at the end of their one-hour lesson was exhilarating. Post-lesson, the kids built a snowman, had a snowball fight and sipped hot chocolate. It was a perfect first ski day for our munchkins.

Away from the mountain, Boone offers several other winter diversions, from ice skating and sledding to snowshoeing. Hawksnest Snow Tubing—said to be the largest snow tubing park on the East Coast—is a must-visit. About 30 minutes from downtown, it offers more than 30 lanes of snow tubing with runs spanning from 400 to 1,000 feet long. Just make sure to watch the weather as the park often shuts down during rain.

Boone is also known for its craft beer—a fitting reward after a day of winter sports. We sampled quality suds at downtown’s Lost Province Brewing Co. Paired with the gastropub’s homemade pretzels, pizzas and wood-fired mac and cheese, it was a satisfying, all-ages feast. Later, we strolled the streets, popping into shops retailing mountain goods, including the famous Mast General Store where the kids grabbed handfuls of treats from barrels of classic candies.

Boone may not be a world renowned ski spot, but it offers its own sweet dose of mountain life. A welcoming—and close—winter destination, it’s the perfect place to begin a love affair with the snow. Or, for me, get a taste of it to last until next winter.