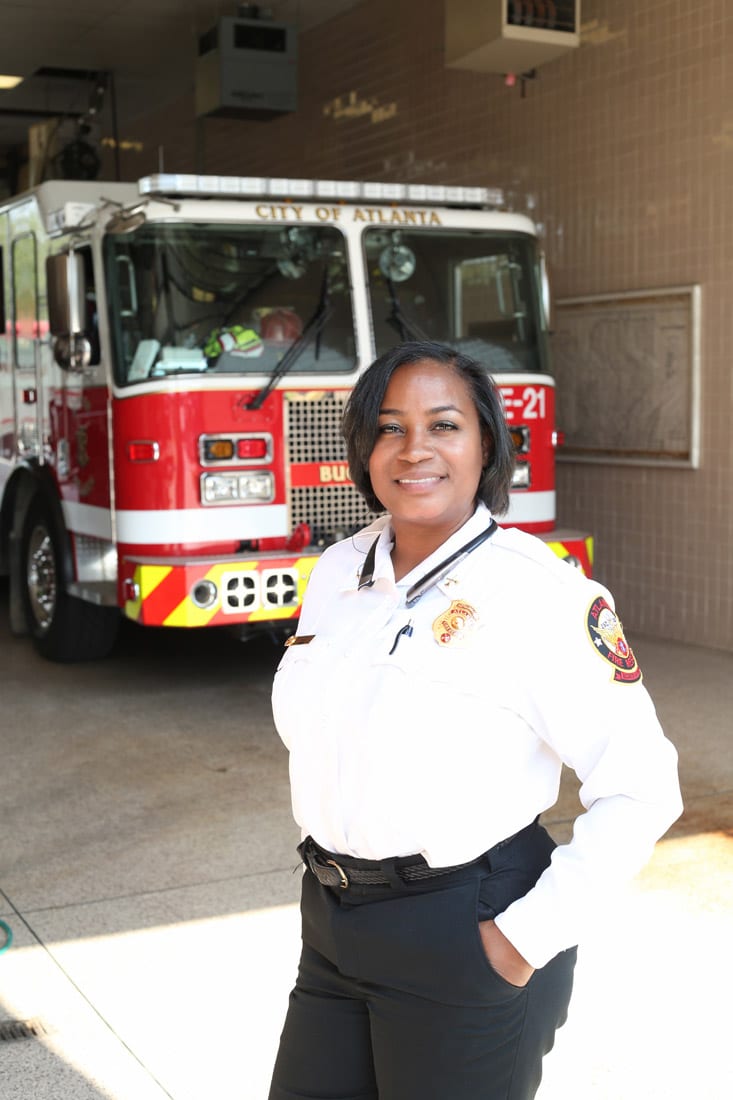 The 48-year-old is the battalion chief overseeing all five of the Buckhead-area fire stations. Based out of Station No. 21 on Roswell Road, she manages the 30-plus firefighters who bravely respond to calls for everything from house fires to suspicious packages, and is on scene herself in the case of major emergencies such as crane collapses or car accidents requiring the use of the Jaws of Life to free trapped passengers. The 20-year veteran of Atlanta Fire Rescue is currently the only female battalion chief in the department.

How did you get into firefighting?

I was working in security, and one day a firefighter came up and asked me where something was, and after I told him, he asked if I had any interest in being a firefighter, because they were looking to recruit more women. I went that very day and filled out the application.

You have a degree in psychology. Did you originally intend to become a psychologist?

I was already working as a firefighter when I started going to school. My idea was to learn as much as I could and get an education. It was important to me because no one in my immediate family had a degree, and I wanted to break that cycle. Now I’m working on getting my master’s in public safety administration.

Tell us about life at the fire station.

It’s just like a home, with sleeping quarters and a kitchen. The crew eats together and takes turns cooking. I work the C shift, which is from 7 a.m. to 7 p.m. Please tell us there’s a fire pole at the station. There is, but as battalion chief, I don’t really slide down it anymore.

What are the majority of calls to the station about?

It’s changed tremendously over the last 20 years. I’d say that about 85% are now EMS calls relating to drug overdoses, injuries, colds and flu, and car accidents, and the other 15% are for fires and things such as hazardous materials, bomb threats, deploying airbags for possible jumpers and suspicious packages.

What’s the most memorable call you’ve ever gotten?

I delivered a baby once. The baby was crowning when we got there, and the mom was on the floor screaming. Afterward, I was practically in tears. It was almost as if this was my child. That was 18 years ago. It’s crazy to think that kid is an adult now.

What’s the most common misconception about firefighters?

That we sit around and watch TV all day. We have a lot of training and other things we have to do when we’re not responding to calls.

If you could share one tip when it comes to fire safety, what would it be?

Make sure your smoke detectors work. Change out your batteries twice a year, in the spring and fall.

You’re deeply involved with a program called Camp Ignite. Tell us about that.

We offer three-day camps to high school-age girls to show them what it’s like to be a firefighter. Nationally, less than 4% of firefighters are women. It’s important to have more diversity.

Yes. I’ve lived in the same house in Grant Park since I was 2 years old. I bought the house from my parents.

What’s one of your favorite places in Buckhead?

Spa Sydell. I pamper myself a lot. Given the nature of my job, I need to decompress.

What else do you do to relax?

I have a timeshare near Helen, Georgia. I go there, get in the sauna, eat clean, meditate and reset my mind and body.

LOVE IS THE KEY