This jewelry designer is on a meteoric, fashionable rise. 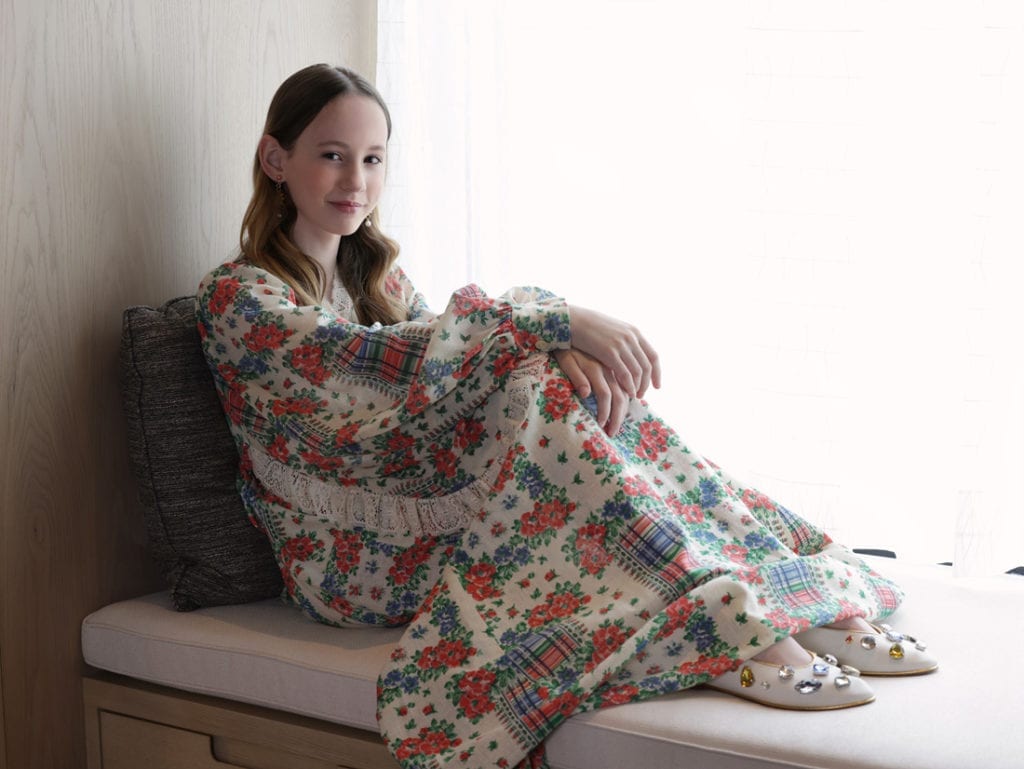 If you’ve ever had the joy of meeting Riley Kinnane-Petersen out and about in Atlanta, you already know how astute she is—not to mention fashionable. She’s usually the best dressed person at the event, which is quite the feat for a middle schooler. She’s also an entrepreneur: At age 5 Kinnane-Petersen “started making necklaces out of old jewelry, putting them on bright colored string and selling them at my lemonade stand during the summer,” she says. “Then my dad posted some pictures of my jewelry on his Instagram account. People wanted to know where they could buy them, so my dad and I created a website.”

Six years later the Sandy Springs resident and her father, John Petersen, have a robust global business called Gunner & Lux that sells jewelry, T-shirts, hair accessories and more through their website and local stores such as Seed Factory and internationally known retailers including J.Crew and Maisonette.

Kinnane-Petersen says she loves working with her dad because “he makes a lot of jokes, keeps things funny and is also a very focused employee.” Her jewelry is colorful and cheerful, perfect for children and even adults who want to bring some playfulness into their wardrobes. Her process starts with “going somewhere that gives me inspiration. If I see something I like or think is neat, I talk with my dad and then we sketch,” she says. The result is everything from a “Honey the Bunny” necklace to cameo and pearl clip-on earrings and DIY kits featuring cherries, award ribbons and palm trees.

The brand includes “Ladies First” hats and “All My Heroes Are Women” T-shirts, as well as old-school letter necklaces spelling out a variety of identities and phrases such as “Feminist,” “Love Wins” and “Bookworm.” She’s also collaborated with other small businesses for items such as a “Magic” hair clip with Daily Disco, a mermaid necklace with illustrator Shelley Couvillion and scrunchies with Sweet Dreams Stitchery. Recently, she collaborated with Zimmerman Shoes, one of the oldest shoe companies in America, on a belt—only the second time the 132-year old company has made something other than shoes.

The items, with accoutrements such as pom poms, tassels and character charms, are whimsical, which is Kinnane-Petersen’s goal. “I hope my products bring happiness and joy. I want people to wear my jewelry and feel good, look good and have fun,” she says.

Fun abounds on Instagram, where the account is run by her dad, and where you can catch her inspiration, outfits and tutorials on how to put together some of her favorite looks. While social media can be overwhelming, she understands its power for good. “I would like people to be inspired to be whoever they want to be. I want people to be happy when they come to our Instagram, to know that it is a safe place and that we are for everyone,” she says.

As this entrepreneur’s business acumen has developed, so has her fashion sense, but she makes sure her creativity is front and center. For her, fashion is “a way to be creative, to express different sides of yourself. Fashion is always changing as we all are.” She might be young, but she’s insightful. As for what’s on deck for 2021: “I am excited not to be stuck in the house with just my parents! We also have so many new product launches and collaborations I am excited about,” she says.

You can catch the tycoon in the making shopping at favorite stores Ann Mashburn, Tulipano, Tory Burch and La Frock, and she’s happy that she’s finally able to wear some things off-the-rack without having them altered to fit her still kid-sized frame. She also regularly checks in on her designs at Seed Factory at Westside Provisions District, one of her favorite local businesses. You can also find her fueling up at H&F Burger and expending energy at aerial adventure park Treetop Quest in Dunwoody.

IT’S IN THE BAG