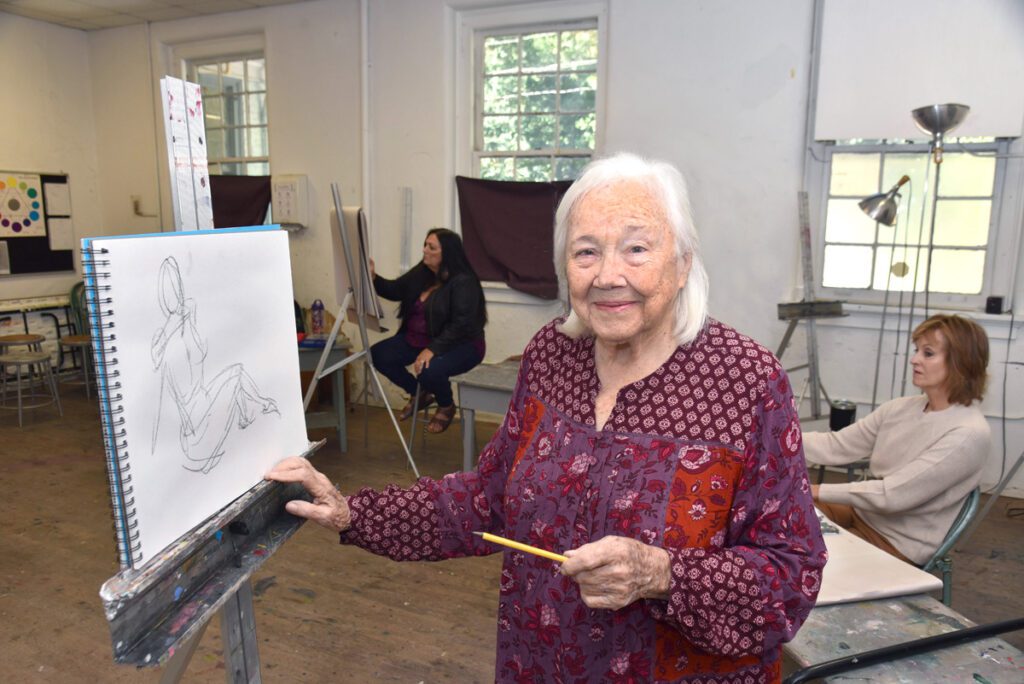 Dolores Kennedy has been woven into the fabric of the Chastain Arts Center for so long that even she didn’t realize it.

“Just before COVID shut everything down, Chastain celebrated 50 years, and I realized I started five years after that [founding],” she says. “That’s 45 years. I had no idea I’d been teaching that long.”

The 91-year-old Brookhaven resident wasn’t looking far into the future when she joined Chastain’s instructor lineup. Her original goal was to expand the then-new center’s offerings by adding drawing and watercolor painting classes. Those were her two areas of expertise, gathered initially through three years of classes at what was then known as the High Museum School of Art. At the end of the program, she was awarded a scholarship to stay for a fourth year, but she decided to pursue a formal degree, which she obtained from Georgia State.

“I’d paint until 4 p.m. then go downtown and take classes,” she says. “I had the chance to paint sets for the old Atlanta Municipal Theater Under the Stars and worked as a commercial print plate maker. But I soon realized I just wanted to be a painter.”

Kennedy lived with her family in the Morningside neighborhood to save enough money to rent a studio in what is now dubbed The Castle, a 1909 house on 15th Street that, at the time of the early 1950s, was home to a bevy of artists and performers. While working there, she earned a number of awards from prominent juries, such as the Southeastern Annual Art Show that drew submissions from eight states.

“One year I won second place in the oil painting division, and the next year, I won first in watercolor,” she says. “I believe I was the only person who won two consecutive top prizes, and I certainly was the only woman.”

The awards provided the motivation and confidence to keep Kennedy focused on painting. “And I’ve stayed with it for the rest of my life,” she says.

Not long after starting at Chastain, Kennedy expanded her class offerings. “As opportunities presented themselves, I taught landscape, figure drawing and advanced watercolor. I gradually just taught more and more.”

When she went through a divorce, friends encouraged her to get out and socialize. But Kennedy knew she needn’t go far.

“I realized I didn’t have to get out to meet people: If I kept teaching, the world came to me,” she says. “I’ve taught people from all around Georgia, New York, Peru, England—people from all over the world who moved to Atlanta wound up in my classes.”

She’s also met people in classes she’s taught at the Spruill Center for the Arts in Dunwoody and the Abernathy Arts Center in Sandy Springs. But she considers Chastain her home base and plans to keep teaching there.

“I love doing it; it keeps my feet in the studio,” she says. “And there’s no better way to learn than to teach.”