Growing up in Buckhead, where she attended Morris Brandon Elementary and Sutton Middle School, Lissa Webber was enamored of writing. But after graduating from the University of North Carolina, her career path led her in an opposite direction. First were the years as an investment banker in New York, followed by business school at the University of Chicago. By 2012, Webber was married and heading back to Atlanta’s warmer weather and an acquisitions job with Turner Broadcasting. It wasn’t until she left the corporate world to take full-time charge of raising her kids, now 3 years old and 20 months, that the thought of writing reemerged. “I’ve always loved to write, but I never pushed through it,” says the Buckhead resident. “But reading to my children sparked that love in me again.”

Webber was also aware that children’s books present a different challenge than the fiction adults consume. “[As a parent, I] read them over and over and over, so it really matters that I like the book, too,” she says with a laugh. “But so many books out there for this age group are kind of fluffy. I love the ones that have some substance, but they’re harder to find. That’s what started my toying with the idea of writing something myself.”

Webber also noticed that many children’s books feature boys as lead characters. “Even the animals are boys,” she says. “My little girl would often ask, ‘Is Gerald the giraffe a girl?’ And I thought, ‘Why can’t he be?’ So even though I wanted to write a book that would appeal to everyone, it was important to have lead characters who are girls.”

Combining those elements inspired Webber’s debut work, Pipsqueak the Puppy, the tale of the tiniest pup in a litter who tackles feeling left out, an unconventional friendship with a squirrel and learning to be herself. The lessons are subtly taught in singsong verse.

“The main theme is about being the best version of yourself to be successful,” says Webber. “The old and chunky squirrel teaches Pipsqueak that she can’t be somebody else; she has to play in her own way. Another theme is building bridges between unlikely friends and the idea that we can all learn from each other.”

Webber’s chief critic, her daughter, Claire, is also the new book’s first fan. “She loves it and thinks the squirrel is so funny,” says Webber. “But she identifies with Pipsqueak because every child feels small and wants to be bigger.” 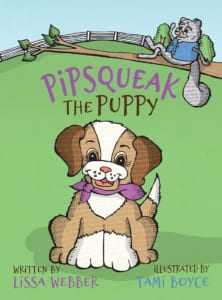 While Webber’s son, Ryan, is too young to connect to the book, he did play a vital role in his mom’s decision to donate all of the proceeds from the sale of the book to Children’s Healthcare of Atlanta. When Ryan was just 7 months, an unusual intestinal infection landed him in the hospital, where he underwent emergency surgery.

“It was the most terrifying week of my life,” says Webber. “But in a few days, he was the healthiest kid ever. Thankfully, there was nothing tragic about the story, but you don’t know you need a good children’s hospital until you need it.”

PIPSQUEAK THE PUPPY is available at Barnes & Noble in Buckhead and online at Amazon or pipsqueakthepuppy.com.