Put a painting on the floor? The idea does raise eyebrows, says Buckhead artist Alan Vaughn. But in fact, it’s been happening for eons.

“It goes back many hundreds of years, when big expanses of ship sails were painted by house painters or artists and used as rugs to cover wooden floors,” says the painter and retired Art Institute of Atlanta professor. 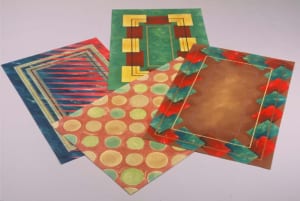 The concept of colorful protectors for hard-surface floors faded with the popularity of linoleum and other easy-to-maintain finishes, but it began making a comeback in the 1980s. For Vaughn, a rug offered a way to combine art and practicality.

“I wanted to express myself as a painter but also have the work be functional,” he says. “I believe things have more appeal if they have more functionality.”

While he was still teaching, Vaughn showcased some of his painted rugs at a local gallery, where they were quickly snapped up. “I sold everything I could make and then started applying to juried shows around the country and was getting in,” he recalls. “That launched a full-time business that I had, working with designers and decorators, for almost 22 years. And I’m still doing rugs for people out of my warehouse studio in Chamblee.”

Unlike a wall painting, Vaughn approaches the floor art with the user in mind.

“I do have designs I know people really like, but sometimes they’ll bring in photos from magazines they want to include,” he says. “I also make house calls to take measurements and look at samples. We start with my designs and then alter things. In the end, they’re all one-of-a-kind because they’re hand-painted; I’m the single person doing it. And I sign each one.” 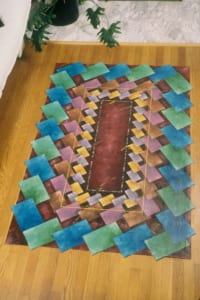 Many of Vaughn’s rugs feature mosaic patterns with plenty of straight lines and right angles, though he’s into exploring curves and spirals, too. The size can vary from 2-by-3 feet up to a 12-by-15-foot rug or a 30-foot runner, and costs range from $40 to $60 per square foot. And although the rugs are painted on the same canvas material as that of wall paintings, Vaughn leaves a deep margin all around so the edges of the canvas can be neatly folded over. (If this were a painting, the margin would be the part of the canvas that got stapled onto the frame.) He finishes the design with a clear varnish that’s scuff proof and adds a skid-proof backing.

“The acrylics are the most durable, so you can walk on them without cracking them,” says Vaughn. “And you can wash them.”

That’s another fact that raises eyebrows, he admits.

“When I first started, people were trying to figure out if I was telling the truth that it would really work as a rug,” he says. “But I just remind them that rugs are paintings on canvas for the floor.”

Alan Vaughn’s rugs will be on display during the Brookhaven Arts Festival on Oct. 19-20. For more information about his work, visit facebook.com/alanvaughnstudios.

SOARING WITH THE ANGELS