Pick just about any social issue and there’s probably a kids’ book about it. From bullying and body image to how not to be wimpy, a selection abounds to give young readers insight on complicated concerns.

Yet in that expanse, Del Martin and two of her colleagues found something was missing. The Buckhead resident and professional fundraiser couldn’t find anything that taught kids the importance and value of philanthropy.

“I’ve been thinking for years that there were tons of books about volunteerism, but nothing that teaches kids about giving and raising money,” says Martin. “So mostly from frustration, we wrote this book.”

The Adventures of PhilAnThropy fills the niche. Martin tapped into her extensive expertise as director for local fundraising firms and as a consultant, then joined forces with Linda Wise McNay and Ailena Parramore, whose backgrounds include educational and arts fundraising. “We got together on a monthly basis to hammer out a list of ideas, and it took about a year to finish,” says Martin.

The 31-page work recounts the story of three kids who hope to raise enough money by selling lemonade to buy things for themselves. But they soon realize the money might be better spent on a lift for the local pool so their wheelchair-bound friend can enjoy the water as well.

“They pool their allowances, do extra chores for neighbors, babysit, make cookies and host a bike race,” says Martin. “Then one of the fathers gives them a challenge gift, so they learn about that. At the end, they’ve raised enough money for the lift and to take care of future expenses.”

While the story is aimed at kids from second to fourth grades, Martin has found it draws in a range of ages. “I’ve read it to kindergartners and fifth graders, and they all get something out of it.”

The authors also added specific suggestions in the back of the book on how youngsters can start a philanthropy club and raise money for a cause. “I don’t think kids are looking for these kinds of ideas; kids are basically born selfish and have to be taught to think about others,” says Martin. “But parents who want to teach their children about philanthropy can use them as a starting point to talk about things they can do for others.”

A portion of the book’s proceeds is being donated to children’s charities selected by the authors. So far, both Kids Boost and the Midtown International School have been beneficiaries. 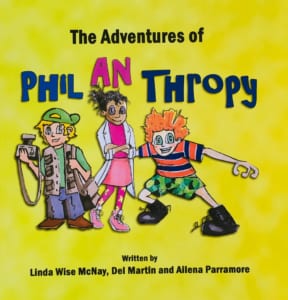 The Adventures of PhilAnThropy is available in bookstores and on Amazon.

A KIDS’ GUIDE TO GIVING

Here are some tips on starting a philanthropy club from The Adventures of PhilAnThrophy, by Del Martin, Linda Wise McNay and Ailena Parramore.

Think about what you want to accomplish and why. Is there a neighbor or family friend who has a need? Is there a nonprofit organization that could use volunteers or funds?

Ask a parent or adult to help you get started. Discuss your goals and what steps you’ll take to accomplish them.

Decide which friends will be part of the club. Who will lead the meetings?

Decide when and where you’ll meet.

Once you’ve met your goals, don’t forget to celebrate your accomplishments as a team.