Going Back for Seconds

Teresa Caldwell is a multi-hyphenate who has honed her tastemaker status over the years. She’s a celebrity stylist, an interior designer and co-founder of Taste Design, the author of the memoir I Once Was Her and mom to rapper and film star Bow Wow—and that’s all before mentioning that she has more than 100,000 followers on Instagram. Shoppers flocked to boutiques where she shared her style in the past, including the online iteration of The Taste Boutique that she launched in 2012, and NeNe Leakes’ Swagg Boutique in Buckhead that closed in 2020. Now she’s gearing up for an even bigger following with the opening of The Taste Boutique at The Interlock on the westside.

The new store is a 1,500-square-foot gem cofounded by Caldwell and her interior design partner, Michael Elliot. The two decided to reincarnate the women’s and men’s apparel, accessories and home gifts boutique this year after finding themselves at a loss when it came to sourcing interesting accessories and gifts in their interior design work. “There was nowhere to get cool gifts in Atlanta. We were always going to New York and Los Angeles to find things. So I said, ‘Let’s just do it,”’ she says.

Elliot and Caldwell are both buyers for the store. “I felt like four eyes are better than two,” Caldwell says. Their point of view is looking for unique items you can’t find everywhere else. That includes brands such as Rizzoli, Zadig & Voltaire, Michael Lauren and ESSEutESSE, a shoe brand Caldwell declares has “the hottest sneakers.”

Designed by Michael Habachy of Habachy Designs, the interior is meant to feel zen and grand at once. “The dressing rooms are huge, with beautiful mirrors and drapes and tassels,” Caldwell says. 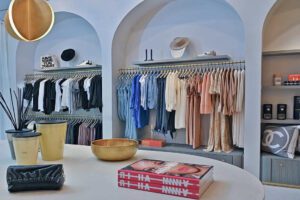 Taste also includes a store-within- a-store. Called Essence of Taste, or E’OT for short, founder Essence Bembry offers urban streetwear and luxurious accoutrements. (Bembry is in the same celebrity sphere as Caldwell, as she is the mother of NBA superstar DeAndré Bembry.) Caldwell intentionally didn’t delineate where one boutique begins and the other ends. “I want people to buy what they like, and you don’t know who you are buying from until you reach the cash register,” she says.

This season, look out for bright color trends in canary yellow, electric hot pink, sky blue, lilac and what Caldwell calls “Georgia peach,” a sunny shade. The boutique will have these hues represented in cut-out cocktail dresses, staple light layering pieces such as jackets and light sweaters, and work-ready blouses and wide leg pants. Caldwell also says that hoops are having a comeback, and her preferred jewelry lines are Luv AJ and Sheila Fajl. Also look out for art puzzles, totes emblazoned with “HAVE SOME FUN TODAY” and House of Wise CBD products.

Recently, Caldwell closed the store to the public to allow actress Taraji P. Henson to shop, a validating experience for the owner. She says Henson described it as feeling like she was in a hotel lobby. “Her feedback brought me to tears,” Caldwell says. “She was in a dressing room and said, ‘I feel like a princess in here. I want everything in here. I want to come here and just stay.’ It’s everything I wanted customers to feel.”

Lured to the Lake

Going Back for Seconds

From Drab to Fab