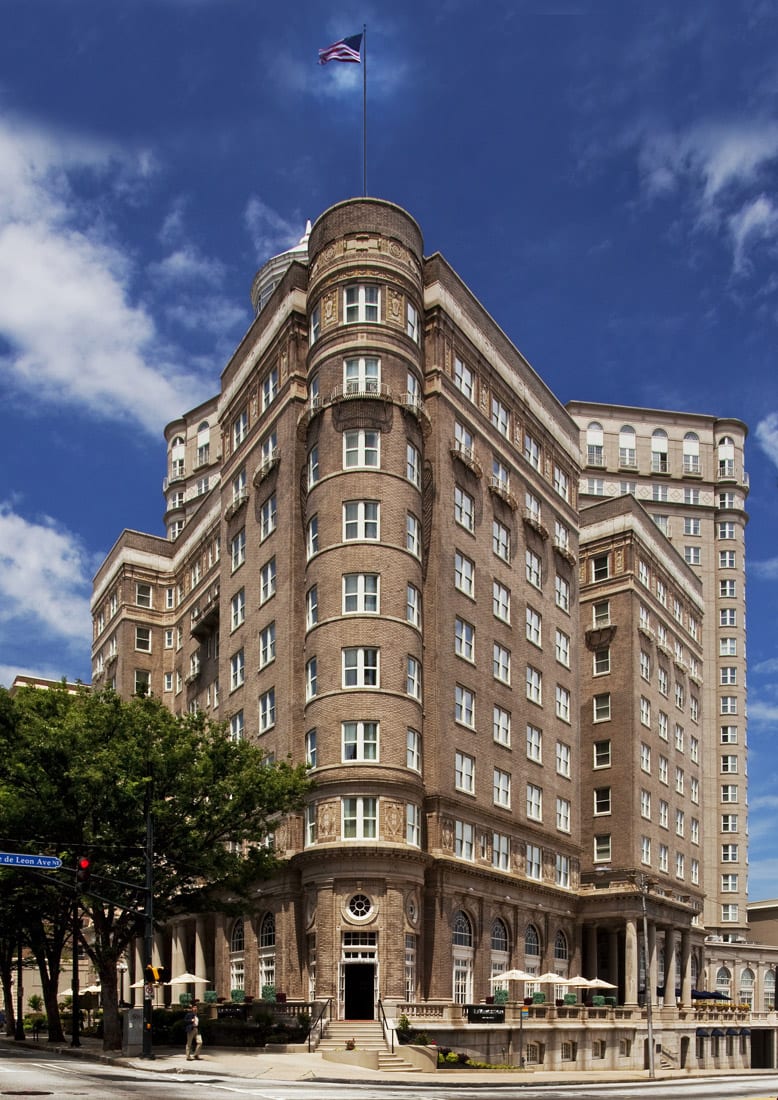 Atlanta isn’t known for its wealth of historic architecture. Sure, we have the Swan House in Buckhead, the iconic Georgia State Capitol building downtown and the L.P. Grant mansion in Grant Park. But none of these invite visitors to unpack their bags and soak up the city’s past in as glamorous a style as The Georgian Terrace hotel.

Towering over the corner of Peachtree Street and Ponce de Leon Avenue, the beige-brick building has been a Midtown landmark since it opened 107 years ago. It’s gone through transformations, renovations and revitalizations through the years, which have served to bring it into the 21st century while remaining a polished and elegant reminder of the pre-World War I era.

The first thing guests should know is that the current lobby and 20-story glass atrium were additions from the 1980s. The original structure, built between 1910 and 1911 to mimic the classic hotels of Paris, is just 10 stories but still features the expansive, wraparound terrace that’s perfect for an alfresco meal, late-night cocktail and people-watching at one of Peachtree’s busiest intersections. It was, and still is, a sumptuous space for gala celebrations in marble ballrooms lit by massive chandeliers. And it can’t be beat as a dinner spot for those heading to the Fox Theatre, which opened across the street in 1929. For most of its early life, the Terrace was the hotel of choice for famous visitors such as then-vice president Calvin Coolidge, tenor Enrico Caruso and members of the Metropolitan Opera Company, and film stars Clark Gable and Vivien Leigh, who stayed there during the 1939 Atlanta premiere of Gone with the Wind (which was held at the Loew’s Grand downtown, not the Fox).

A grassroots rally to save the Fox in the late 1970s inspired a similar fervor for reclaiming the Georgian Terrace, which was added to the National Register of Historic Places in 1986. In the pre-Olympic days, when the new building added 214 units to the original 80 rooms, the property was converted into apartments. It wasn’t until 1996 that it morphed back into a hotel, which explains the presence of fully equipped kitchens, dining areas and enough room for sofas and club chairs around flat-screen TVs in many suites.

What made The Georgian Terrace a magnet more than 100 years ago is still in play today. Its ideal location, coupled with special pre-theater menus at the Livingston Restaurant + Bar, still makes it one of the best places to grab dinner before a Fox show or a drink and pimento cheese and bacon pizza after in the basement level Edgar’s Proof and Provision. And what in the early 1900s was a suburban outpost is now a bustling district of entertainment and shopping, all within easy walking of the lobby.

Inside, the hotel gives guests the chance to unwind in a fully equipped penthouse fitness center. Nearby are an outdoor pool and a small rooftop terrace where, on a clear night, the stars twinkle above the gold spire of the nearby Bank of America tower and the lights of planes heading into Hartsfield-Jackson airport sweep across the sky. Below, the crowds pouring out of the Fox face the city’s ever-present traffic on the trip home, while Georgian Terrace guests have just an elevator ride to their comfy beds. In the morning, the Livingston staff will sate them with American and Southern-influenced breakfasts in the dramatic two-story dining room, where, with enough imagination, they might just conjure a grinning Clark Gable at a table nearby.