AS LEAD CONCIERGE AT THE MANDARIN ORIENTAL, ATLANTA, JANICE DEMPSEY HAS THE JOB OF MAKING GUESTS’ DREAMS COME TRUE 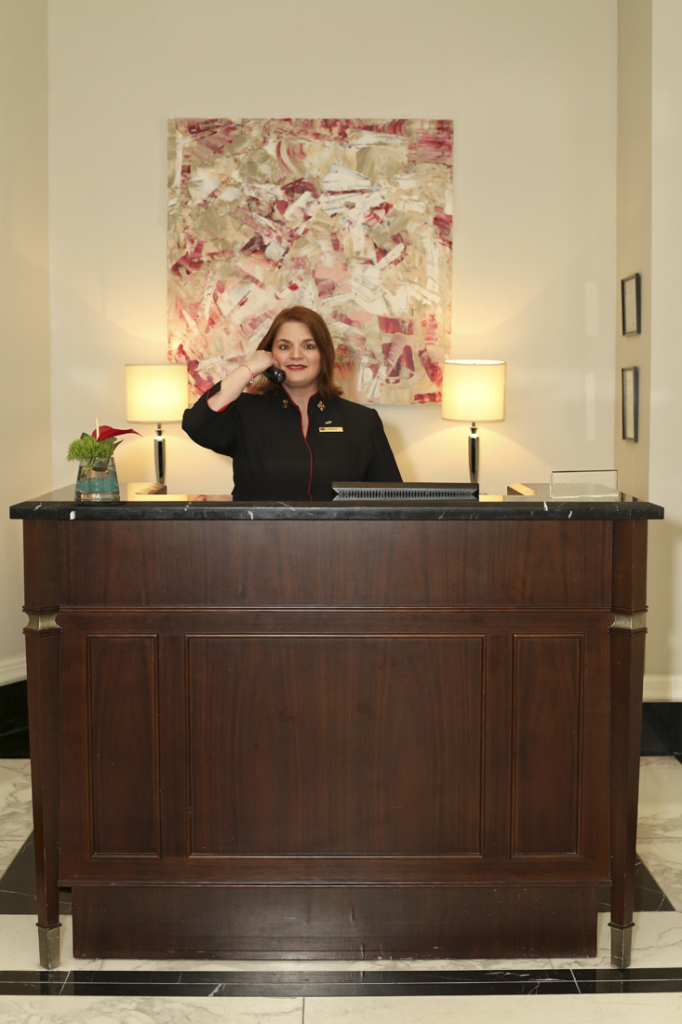 Janice Dempsey’s phone typically rings every five to 10 minutes. “Hello, this is Janice. Can I help you?” she’ll ask way too many times to count throughout the day. That’s to be expected, though, for someone who works as the lead concierge at a luxury hotel like the Mandarin Oriental, Atlanta. Along with the calls, she gets dozens of emails with various guest requests and internal notices about incoming VIPs, flowers that are going to delivered and the like. “Things come quickly,” admits Dempsey, who’s been with the Buckhead property for four and a half years. “You’re in a time crunch, and you have to prioritize. And you really have to be able to multitask.”

Born in Germany, but a resident of Atlanta since the age of 2, Dempsey began her career as a flight attendant for TWA. Decades later, after American Airlines took over TWA, Dempsey opted to take early retirement. But she had no plans to stop working, so she decided to become a concierge. “There are a lot of similarities between working for the airlines and for hotels,” she says. “For one, both are very service-oriented. So it was a natural transition.” Plus, she genuinely seems to like helping people, and, as she puts it, “making the impossible possible.” Like the time she saved an elderly gentleman who’d just driven in from Alabama a trip to the hospital because she was able to track down vital medical supplies he’d forgotten to pack.

Her dedication and professionalism have earned her the right to proudly wear on her lapel a pair of golden keys, the symbol of Les Clefs d’Or, an international organization that only the most experienced and talented concierges can get in to. “There are only about 5,500 members worldwide,” says Dempsey. “It’s an honor to be in that group.”

What’s it like to be at the beck and call of 15 floors’ worth of world travelers? “The thing about being a concierge, no two days are ever the same,” admits Dempsey. Here’s how one of those atypical days went down recently.

9:35 a.m. On her drive in to work from her home in an east-side suburb, Dempsey listens to the radio to pick up ideas and stay abreast of what’s going on. “I have to know not only what’s happening in Atlanta, but all of Georgia,” she says, noting that guests will ask everything from “Where can I get Vidalia onions?” to “Where can I go ziplining?”

10 a.m. Uniformed, energized and ready to start her shift, Dempsey heads to the concierge desk tucked in a corner just to the right of the main entrance. She fires up the computer and gets out the spiral notebook where she jots everything down. Despite having to log every guest request and call in the computer, whether they’ve forgotten a toothbrush or need transportation to the airport, Dempsey also scribbles notes and marks items off as they get done. It’s one of the checks and balances she does to make sure nothing slips through the cracks. “We take ownership of each guest request to ensure guests don’t have to repeat themselves,” Dempsey says. She also ends every call by repeating back to the guest the details of the request. “So, you need reservations at such and such restaurant for tomorrow at 8 p.m. for four people, and I can reach you at such-and-such number to confirm the reservation, correct?”

10:10 a.m. Among the other tasks Dempsey does straight out of the gate is going over the “New Day at Mandarin Oriental” briefing sheet that chronicles everything happening at the hotel that day, from who has what spa appointments to which meetings are being held in which room. “I have to be informed,” she stresses.

11:05 a.m. The hotel gets a lot of repeat business, and Dempsey is quick to remember names and facts about frequent visitors. Commiserating on the phone with a guest about the fact they both went to the Falcons’ playoff game the previous Sunday, she tells him, “I’m still hoarse from screaming.”

12:55 p.m. A guest comes up to the desk and asks where the business center is. Rather than just pointing him in the right direction, Dempsey walks him there and then helps him log into the computer. “When a guest asks where something is, we always walk them at least half or three-fourths of the way there.”

2:20 p.m. A family with a small child is checking in, so Dempsey pulls out the hotel’s little red wagon that’s filled with toys and lets the youngster pick out his favorite. “We’re heavy on the amenities,” Dempsey says. “It’s our way of saying thank you to our guests.”

3:45 p.m. While on the 14th floor checking on the progress of a rose petal turndown for a guest’s anniversary, Dempsey runs into the gentleman who was looking for the business center earlier. “Did everything go okay?” she asks. “Do you need any more assistance?”

5:15 p.m. A woman walks up to the desk and asks where she might go for a jog nearby. Dempsey opens the doors of the adjacent closet— nicknamed Narnia—and pulls out a running map. The closet is stacked with copies of local magazines, maps, menus, brochures from local attractions and other materials that guests might find handy.

6:30 p.m. Dempsey signs off and heads home. After dinner, she spends the next couple of hours dealing with paperwork relating to her role as an officer with the Concierge Society of Atlanta. “We’re deep into membership renewals right now,” she says. After that, she plops down on a cozy chair on her screened porch with a book and her cat, Sweet Pea, curled up on her lap. After standing up for a good eight hours, what Dempsey looks forward to most at the end of a long day is “just sitting down and getting off my feet.” Still, she wouldn’t have it any other way. “I have the best job at the hotel,” she insists, “because I help people create memories and have a good time while they’re here.”