Jon Lester has been called one of the most successful players in major league baseball. 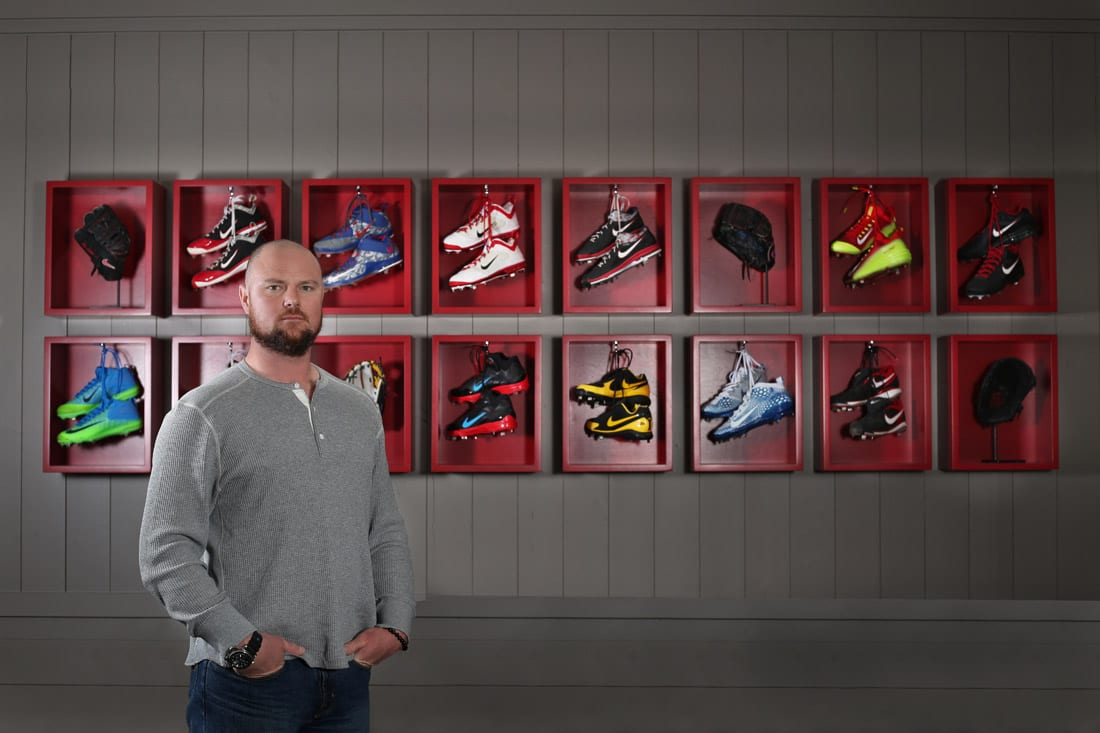 A sportswriter recently touted the Chicago Cubs pitcher as one of the top five best free agent signings of all time, and another declared, “When the team needs a stopper? Lester is the guy you want on the mound.” The 35-year-old leftie heads into his 14th season with five All-Star nods, three World Series rings and a career record of 177-98. But while he may don a Chicago Cubs uniform when he takes the field, he lives in Buckhead five to six months out of the year. “Atlanta is our forever home,” says his wife, Farrah, with whom he has three children.

When did you start playing baseball?

I was 6 or 7. My mom was my coach for the first three or four years.

What game stands out the most after all these years?

My no-hitter on May 19, 2008, against the Royals [he was playing for the Boston Red Sox at the time]. I pitched the full nine innings. I didn’t think I had it until there were two outs in the eighth inning. I walked a guy in the ninth, then got two quick outs.

What’s your favorite ballpark to play in?

The one that stands out is the old Yankee Stadium. Walking into that bullpen, there was just so much history.

What do you think of SunTrust Park?

I love it. They did a really good job with it.

Do people recognize you in Atlanta?

I can pretty much fly under the radar, even in Chicago.

You made your major league debut at age 22 in June of 2006, and just two months later, were diagnosed with cancer.  Did you think your career was over before it even had a chance to start?

Yes and no. The kind of cancer I was diagnosed with [non- Hodgkin’s lymphoma] has a [high] cure rate. I had chemo and was back at spring training in February. I was pretty lucky.

You’ve since started a foundation called NVRQT (for “Never Quit”), and one of the things you do is to put on these events called Road Rallies for kids battling cancer. Tell us about them.

Instead of going to the hospital to visit sick kids, we bring them out to the ballpark and let them watch batting practice and meet the players. We give them food vouchers too so they can have the full [game-day] experience.

You’re in your mid-30s and have been playing a long time now. Any thoughts about retiring?

How do you keep yourself in playing shape these days?

My game has changed on a lot of levels over the years. You learn how to take better care of your body. I’ve done everything from cryotherapy to hyperbaric chambers to floating pods (or nap tubes, as I call them). As you get older, you try different things.

Growing up, it was Ken Griffey Jr. I got to see him play every summer and got to meet him in 2008 during my first full season in the majors. I had a Mariners jersey, and he signed it for me.

You’re from the Seattle area originally and play for the Cubs in Chicago. How did you end up living in Atlanta?

In the minors, I knew a couple of guys who lived here. My best friend lives in south Georgia, so I would come down to visit him, and he got me into hunting. I now have 1,500 acres in southwest Georgia. It’s our farm, our getaway. We have deer and ponds that we fish.

We hear you also like to play golf and recently participated in the Diamond Resorts Tournament of Champions in Orlando. Are you any good?

Kind of. It’s funny, I’ve pitched in front of thousands of people, but it’s a strange feeling golfing in front of 50 people at an event like that.

I just joined Cherokee [Town and Country Club] and have played it a couple of times.

What are some of your favorite places to go in Atlanta?

We’re big restaurant people. On date nights, my wife and I go to Canoe or Umi. We used to go to Chops quite a bit. It’s probably my favorite, but it’s a hard place to take the kids. Although we don’t usually discriminate when it comes to bringing our kids along to restaurants; we just get an early reservation.

Major League. All of the baseball movies, really.

What’s the best book you ever read?

I’ll say this, the book that I didn’t struggle reading cover to cover was The Da Vinci Code. I found it fascinating.

If you could have dinner with any three celebrities, living or dead, who would they be?

Babe Ruth. A president; JFK would be cool. And either Tiger Woods or Michael Jordan.

Let’s say the world is ending tomorrow. What would your last meal be?

A big Oscar-style rib-eye, a fully loaded baked potato, broccoli and a good bottle of wine.