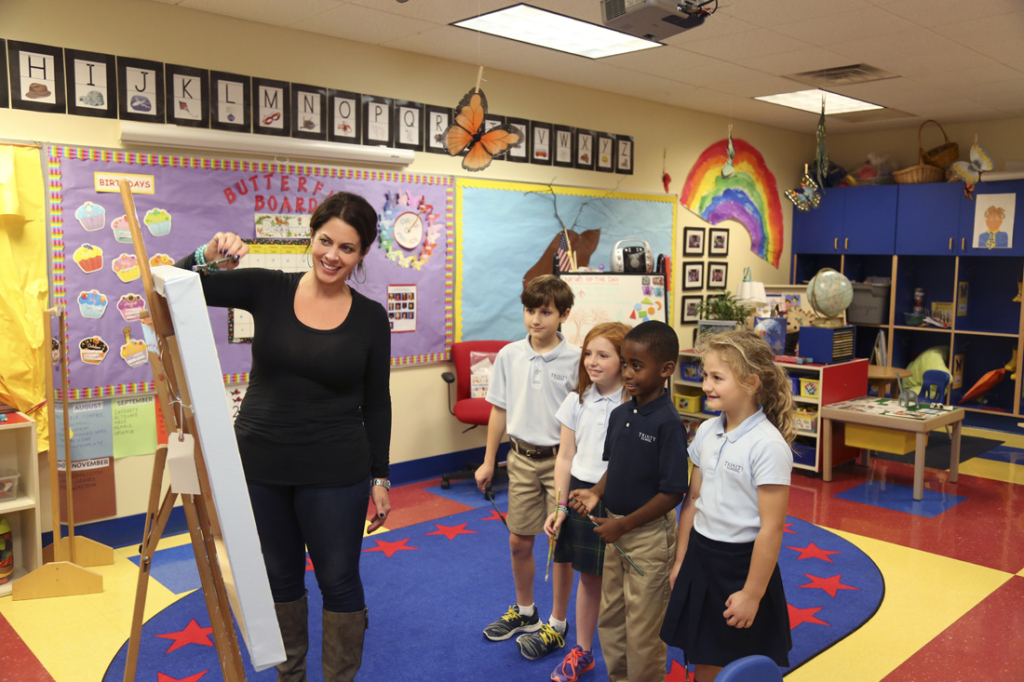 For years, Nancy B. Westfall’s career as a metal artist was fueled by practicality and kids. That explains why it’s taken a while for her to engage her real passion: painting.

“I have always painted and drawn,” admits the North Carolina native who now lives on Buckhead’s west side. “But unless you go to an art high school, most kids don’t come out with the portfolio needed to apply to art school. I didn’t have one, but I was very into jewelry making, so I went to UGA as a metal major. But all my electives were painting.”

Westfall went on to earn a Master in Fine Arts from East Carolina University and for years enjoyed working with lathes and torches. But becoming a mom changed that.

“Once I had little kids, I didn’t want to have acetylene torches in the house,” she says.

When Westfall’s husband, Stephen, moved the family from New York for his job with an Atlanta wealth management firm, she set up a home studio and devoted herself to abstract paintings “with some recognizable elements so it gets just a little surreal,” she says with a more than a bit of relish. “I used to do very detailed, almost photographic street scenes, but abstracts are a lot more challenging,” she says. “With a street scene, you know where you’re going, but an abstract has no map telling you where it will end up. You still want to have balance, color and depth, but without a particular direction.”

Westfall loves to paint big—as big as will fit in her car so she can move them herself. Some of her canvases are so large she uses house paint and big brushes to fill the space. But if she’s fighting painter’s block, she says, “I’ll just do tiny paintings with watercolors or charcoals to break things up.” Westfall also keeps things small when she’s working with youngsters. About seven years ago, when her now-teenagers were students at Trinity School in Buckhead, she volunteered to lead an art project in a classroom as part of the school’s annual Spotlight on Art festival in late January. The finished work was put up for auction during the event’s six days of exhibitions and sales. And she’ll be doing a similar project for this year’s event.

“Painting with kids is one of my favorite things, and I’ve worked with each class, but I really like working with the 3-year-olds,” she says. “They’re not even writing their names at that age, so doing an art project can be very challenging. I go in, give a little talk about my style, what I think is important about art, then I set up outside. Two kids at a time come out, and I let them paint on the canvas. I’ll do the outline, and let them add their own style. Every year, we’ve managed to create an art project that’s sold, and that’s always fun.”

“The younger ones are geniuses; they have no self-consciousness,” she says. “But then there’s a certain age at which they start to say, ‘I’m not good at art.’ We talk about someone who says, ‘You’re not doing it the right way,’ and how they can say, ‘This is my way.’ And then I tell them about a little boy named Pablo who drew faces differently…”

A MOM’S GUIDE TO BECOMING AN EX

FROM FINANCE TO FILM