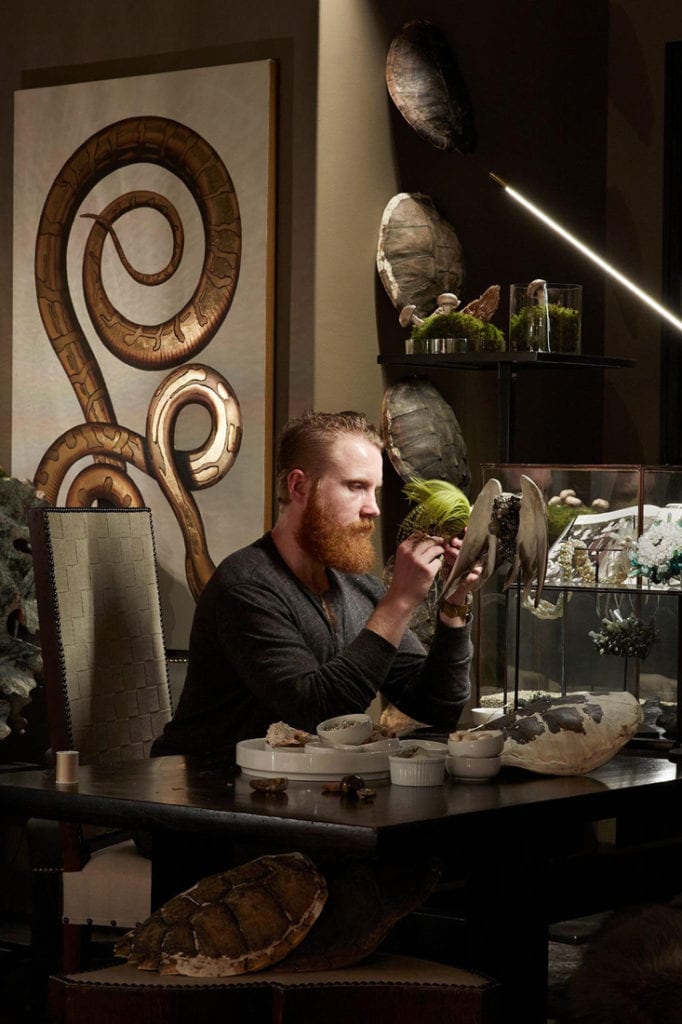 A self-proclaimed rule follower, sculpture artist Blake Weeks says he was raised to follow the road more traveled. He was his Alabama high school’s valedictorian. He attended University of Alabama at Birmingham and eventually Georgia State University College of Law because it’s what, according to Weeks, he was “supposed to do.” However, something was always missing.

In 2010, Weeks found himself sitting in a public health law class, and instead of frantically taking notes like his peers, he was daydreaming about a few pieces of jewelry he had made just for fun and donated to a local fundraiser. The items had garnered top dollar for the charity. “I just thought, ‘What am I doing? I don’t think I’d even want to hire me as a lawyer. I’m not that interested in this,’” says Weeks.

After nearly two years of law school, he left to pursue art, something he had dabbled in across various mediums, since childhood. “I always loved fashion; I loved art; I loved jewelry; I loved interiors,” Weeks says. Law school, it seemed, was never going to be a long-term solution for his creative mind.

After jobs making window displays at American Apparel, hustling as a photo stylist with renowned photographers such as Erica Dines and working alongside interior designer and artist Steve McKenzie at his now-shuttered retail store, Weeks eventually landed on art as his full-time gig with sculptures as his mode. McKenzie had asked Weeks to create a sculptural light fixture out of natural materials, and he found himself playfully approaching the project. “Once I realized it was OK to write a screenplay instead of a monologue for it, my world opened up,” he says. Weeks realized he didn’t have to put himself, or his art, in a box.

Each of Weeks’ sculptures, all mounted behind glass, walk the line between ethereal and macabre. Even in their stillness, the sculptures seem to move. His intricate pieces are composed of found items such as feathers, pearls and bones, including coyote toes and rattlesnake heads. In addition to cadaverous materials, Weeks is enamored by all things shiny and textural, an attraction he credits to his grandmother’s bauble collection. “I grew up playing in her jewelry box as a kid, and it taught me to see how objects catch light.”

Breathing new life into objects is what gives his work purpose and room to grow. He references a Bible verse from Ezekiel: “Come from the four winds, O breath, and breathe upon these dry bones so that they may come alive.” He says, “I think there’s something so moving about taking this thing that was dead and working with it to bring it back and celebrate it. Maybe at first my work seems gothic to some people, but to me, it’s also celebratory.”

Weeks relies heavily on his senses to help him create. “One of my greatest features and my greatest flaws is I see, smell and hear everything. I try to capture that feeling, see where my mind goes and notice what materials I have available in my home studio [in Ansley Park],” Weeks says. Then, he gets to work. “I’ll have a vague idea of where a sculpture is going, but I also have to really stay open to the fact that it may be totally different at the end, and maybe that’s where it was supposed to be the whole time.”

His first collection, Indefinite Articles, took him nearly three years to complete and was released as a series in September 2019. These sculptures from his first collection have been featured in several Buckhead show houses and at R. Hughes in ADAC in Peachtree Hills.

The confines of 2020 have impacted Weeks’ work, allowing him time to create more now than ever before. “The pieces [I’m working on] feel really hopeful to me. Maybe that’s out of necessity because I just don’t have any more room for anything dark.”