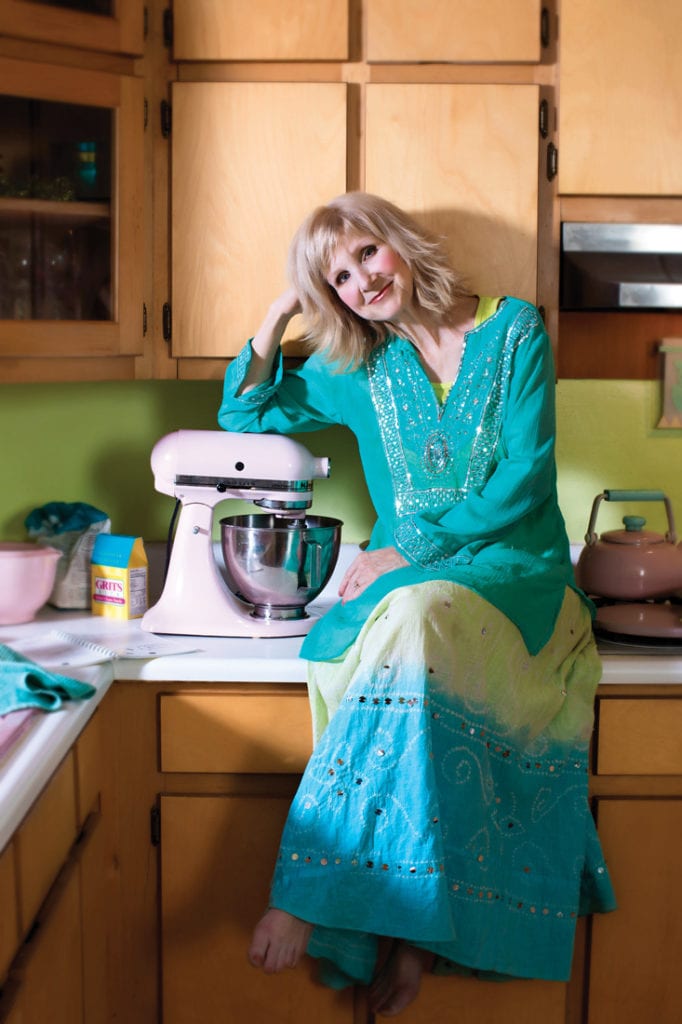 Buckhead resident Diane Pfeifer has had more careers in her 70 years than many families combined. Pfeifer has been a pharmaceutical chemist, country music songwriter, backup singer and cookbook author. And she’s the founder of Grits Bits, both a Southern cookie and a company that sells Georgia made products and gift baskets.

“Whenever I get a hobby, I turn it into something I can make money with,” she says. “I was always torn between chemistry and music. When I started writing cookbooks, I felt like a chemist again.”

Pfeifer wrote her first cookbook in 1987 with 160 pages about popcorn. One thing led to another, and in 1998, she created the original cheddar flavor of Grits Bits, a bites ized snack that incorporates grits for extra crunch.

In the following years, she added five flavors, including Sweet Georgia Brownie, Pimento Cheese and Butter Cookie. She’s since expanded her company to sell customizable gift baskets featuring locally made products, such as Georgia Peach jelly beans and Kiss My Grits cocktail napkins.

She creates welcome bags for weddings and corporate events, and sells her products at church holiday shows in Buckhead and specialty stores such as Fragile in Sandy Springs. Customers can order online and pick up locally. “We were doing curbside before curbside was cool,” she says.

How did you come up with the idea for Grits Bits?

I was at a sushi restaurant in Los Angeles, and the chef asked how we do sushi in Atlanta. I jokingly said we use grits instead of rice. My next cookbook was called Gone with the Grits. I became known as the “Grits Girl” around town. I’d do shows at the [AmericasMart] downtown. People would say, “We have your book; now we want something we can eat.”

So that inspired you to get creative in the kitchen?

Being from St. Louis, I grew up with Cream of Wheat, not grits. I didn’t have any preconceived notions of what you can or can’t do with them. I started researching cheese straw recipes and added grits to the dough. It made them really crispy.

What do you tell people who don’t like grits?

You don’t even taste the grits in my cookies. Do you like the cornmeal on the bottom of pizza? That’s all this is!

How did your company evolve to include other locally made products?

I’ve been a wholesale vendor at AmericasMart for 33 years. Someone there bought 200 [packages of] Grits Bits to put in welcome bags for her daughter’s wedding. She wanted more Georgia-grown items. I went around to find complementary items.

Grits Bits is a one-woman shop. How do you manage it all?

I only need four hours of sleep. It started when I was in the music business. I toured with country singer Tammy Wynette. I slept on a couch in the main living area, which meant I was up as late as the last person to go to bed and as early as the first person to wake up. Plus, I had kids late in life, neither of whom slept.

Tell me about your family.

My 31-year-old daughter works for an ad agency in Denver. The 24-year-old [daughter] works for Netflix in LA. My husband and I are cinephiles. I think my daughter got that from us.

Besides watching movies, what do you do for fun?

I’ve been singing and playing guitar for people in nursing homes for the last 25 years. I taught myself [to play the] ukulele at age 15. I also do this at women’s and men’s shelters.