GET TO KNOW THE SPIRIT WITH A TASTE OF PLACE. 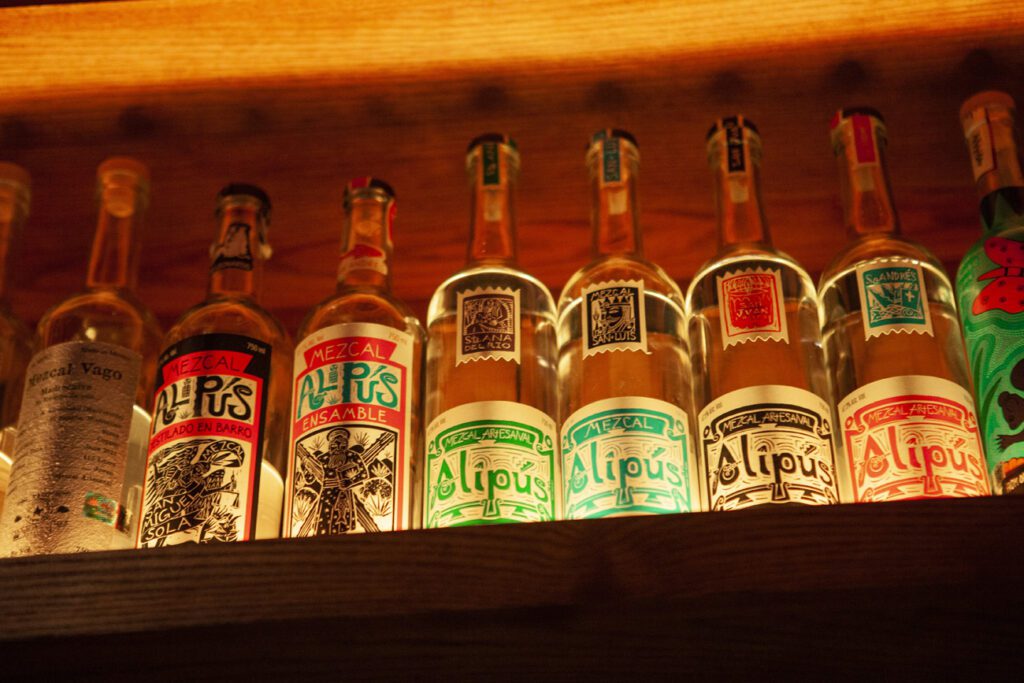 Thanks to its versatility for making cocktails, mezcal has long been a favorite of cocktail enthusiasts and bartenders, and now it’s surging in general popularity. Frequently confused as merely a smoky sibling to tequila, mezcal is often misunderstood. Its unique qualities enable it to highlight different flavor spectrums of a drink.

Similar to how all bourbon is whiskey, but not all whiskey is bourbon, all tequila is mezcal, but not all mezcal is tequila. In this case, both are made by distilling the core—called the piña—of the agave plant. Of more than 200 species of agave, about 40 can be used for mezcal production, but only blue agave can be used for tequila.

Place matters, too. Ninety percent of mezcal is produced in Oaxaca in southwestern Mexico. Tequila is mainly made in the state of Jalisco (also where mariachi music originated).

After harvest, the large, spiky leaves are sliced off, revealing the heart of the agave. Here is where the largest difference (and all the talk of smoke) comes in. The piñas need to be cooked to transform their starches. For most tequilas, this happens in ovens. In contrast, most mezcal piñas are arranged over red hot stones in wood-fired earthen pits, roasting for days and taking on the flavor of smoke. Both kinds of spirits undergo similar last stages of production, where the cores are crushed, fermented and distilled.

Aging is what separates types of mezcal. Most fall into the Joven/ Blanco/Silver categories that are un-aged or aged in stainless or plastic for fewer than two months. Reposado is mezcal aged in oak for two to 12 months. Añejo is aged for more than one year in oak. Mezcal’s taste is expressive of the process and the plant base with green, herbal notes and often a hint of smoke. At Westside’s Miller Union, head bartender Angela Guthmiller adds another drought-tolerant succulent into the mix.

The Holy Elixir cocktail fuses mezcal with the fresh scent and vegetal elements of Chareau aloe liqueur along with cucumber, basil and a celery shrub. Aloe adds a softness, brings out floral aromatics and hits off the smoky body of mezcal, while the other ingredients keep things lively, vivid and refreshing overall. “Mexico calls mezcal, the beautifully crafted spirit that is such a part of the culture, its Holy Elixir,” she said of the drink’s naming.

Celebrating the food regions of Oaxaca, Puebla and Sinaloa, Chido & Padre’s has an extensive mezcal list to accompany the homemade tortillas, moles and hand-smashed guacamole. The cocktail program brings out the flavors of mezcal varieties in delightfully balanced beverages that are equally visually appealing. El Bad Bunny is a bright, zingy mix that includes a traditional Dominican drink that is both nutritious and refreshing. Jugo de zanahoria y naranja sounds unusual, but it’s simply a blend of carrot and orange juice, chock-full of beta-carotene, B6, vitamin K and vitamin C. It’s stirred together with sweet and smoky Xicaru Mezcal and finished with a spicy kick of fresh ginger.

If you’re truly an explorer of mezcal, look no further than Casi Cielo, which translates to “almost heaven.” The restaurant boasts the largest selection in Atlanta with more than 80 options to choose from, including flights that arrive with house made grasshopper salt, an earthy and herbal accoutrement. The verdant La Llorona offers great expressions of vegetal, citrus and floral notes when ordered with Banhez Joven Mezcal. The rich mix of mezcal, lime juice, agave and a pepper puree of jalapeno, habanero and serrano comes rimmed with house made chili powder. It’s a great match for the eatery’s Oaxaca inspired dishes.