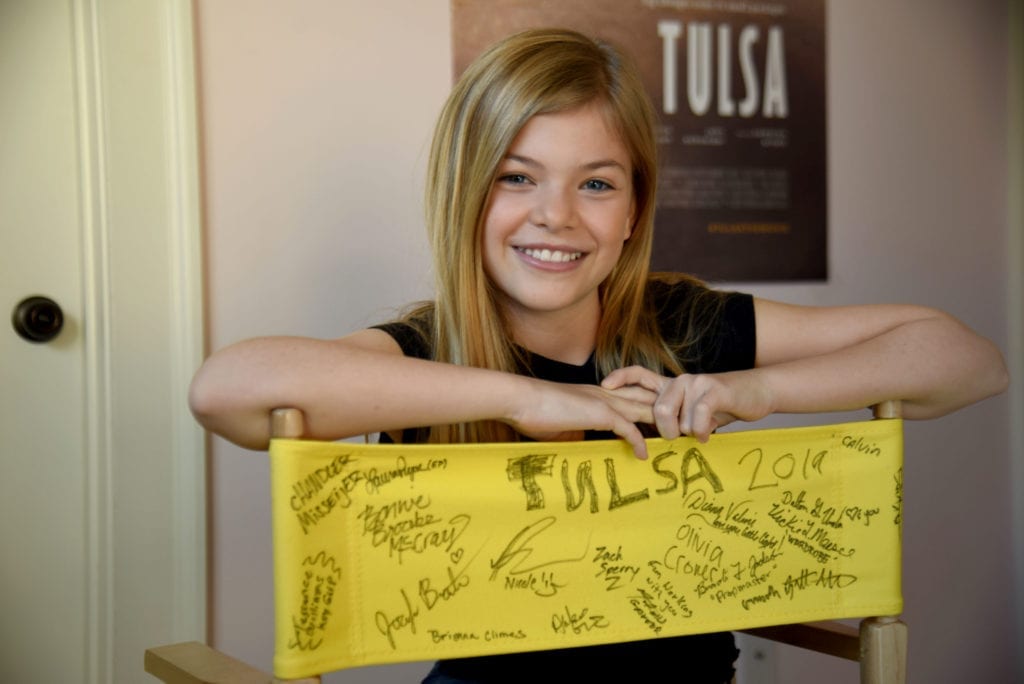 Sandy Springs resident and actress Livi Birch hasn’t been able to play games and bowl at the Main Event with friends this year, but the 11-year-old has certainly had some unimaginable adventures despite the COVID-19 pandemic. Thanks to her burgeoning acting career, she’s walked the red carpet for a film, made an appearance in a popular HBO drama and visited a cheetah sanctuary while on set in South Africa—all in 2020. Birch, who landed her first acting role—a spot in a Gorilla Glue commercial— just last year, has been quickly racking up roles while juggling virtual school at The Galloway School and playtime with her two brothers. In August, her first film, the faith-based Tulsa, arrived in theaters.

Birch says she’s still getting used to seeing herself on the big screen. “It’s been really crazy. You’re in that movie, and people are seeing you,” she says. The release gave viewers a chance to see Birch star as a child grappling with the loss of her mother while trying to navigate a relationship with a father she never knew. In her next major role, she’ll appear in a TV Christmas film titled “A Nashville Christmas Carol” for the Hallmark Channel.

Recently, Birch appeared in a minor role during an episode of HBO’s popular series “Lovecraft Country.” The show, which blends the harsh realities of African Americans with the horrors of H. P. Lovecraft, turned out to be a bit too scary for her to watch, so she hasn’t seen the full episode, just the trailer she appears in.

When Birch speaks of her schedule, it’s with a sense of delight. “I’m doing school virtually, callbacks virtually and some acting classes virtually,” she says. The school offers flexibility so if she has an audition, she can focus on that. But typically, the rest of her day is spent on homework, and shortly thereafter, Birch is free to play or ride her bike.

Like most families, the Birches have had to get creative with their ideas of fun this year. They’ve spent a lot of time walking around Chastain Park together. Frozen yogurt from Menchie’s or a rolled cookies and cream and chocolate ice cream treat from Sweet Charlie’s has replaced the family’s trips to the former Horseradish Grill, the Buckhead restaurant that reopened as The Chastain.

Just like school and family time, Birch’s career training has changed, too. The virtual acting and music classes include sessions with Jan “Mama Jan” Smith, a vocal coach who has worked with artists such as Usher and Justin Bieber, and attending remote sessions with Catapult Acting and The Working Actor Group (TWAG) in Sandy Springs.

Birch’s mom, Joanna, says the classes her daughter takes have helped develop her craft. “We’d had no training when she booked the first thing; we’d never thought about doing that. It was a real ah-ha moment,” she says.

After appearing in Tulsa, Birch used some of her earnings to take an acting class with a Disney theme. The young actress, who admires actors such as Zendaya and Jamie Foxx, dreams of appearing in a Nickelodeon or Disney show one day.

It’s unclear whether or not the pandemic will have subsided by spring 2021 when Birch’s next film, the faithbased romantic drama Redeeming Love, is released, but the family will continue to celebrate all the success the young actress has had thus far. “It’s just kind of surreal,” Birch says of her past year. “When I talk about it, it’s like ‘Wow, that’s really happening.’”