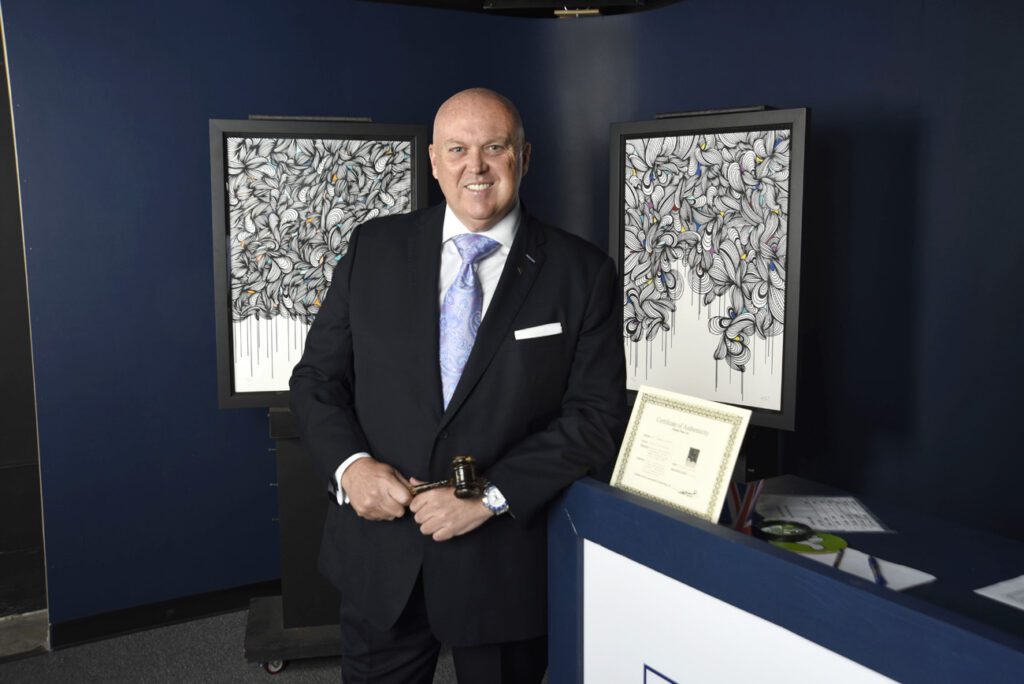 Richard English says he learned the business of nonstop gab through two years of silence. From 1988 to 1990, he was the assistant to a man who led nine art auctions a week in London. Though blind in one eye and deeply impaired in the other, the man was a master at reading the room, English says. He just needed a cue when someone bid, so English would kick his boss’s ankle.

“I never picked up a microphone for two years,” English says. But he has rarely put the microphone down in the three decades since. “I’ve sold more artwork than probably anyone on the planet.”

English, 57, estimates he has led more than 5,000 art auctions, most of them during 22 years working on the Queen Elizabeth 2 and Queen Mary 2 cruise ships while he was based in Brighton, England. He now runs three-hour televised auctions four days a week from a Norcross studio for viewers in the United Kingdom and Australia on The Fine Art Auction.

In 2019, production company AVC sponsored English’s U.S. immigration from England to Tampa, where he was near his mother and sister. This past January, he moved to a Buckhead apartment after travel proved difficult during the pandemic. The show’s U.S. version, which English doesn’t host, runs 20 hours a week on cable and satellite systems in metro Atlanta.

English embraces the oddity of an Englishman staring into a TV camera in Georgia to sell art to bidders battling from Birmingham, England, to Brisbane, Australia. English is on air from 11 a.m. to 2 p.m., which is 4 to 7 p.m. for his British viewers and the early hours of the next day for Australians.

Answering the auction’s phones are people originally from the callers’ countries who now live in Georgia. English says they’ll hold up national flags to represent the bidders, and he plays up the international rivalries in competitions for pieces ranging from signed prints of long-dead artists to original pieces by current painters. The prices range from $100 to $25,000, though English says most items sell for less than $1,000.

“There’s a limit to what we can actually offer on television,” he says. “It’s not going to compete with Sotheby’s and Christie’s. There [also] are probably people that watch the show for years and never acquire a work of art.”

The experience is far different from a cruise ship, where a captive audience is plied with free champagne with no distractions, and the auctioneer can see the woman in the third row nudging her spouse to keep bidding for that Picasso print.

In his pre-TV days, English says he once sold 220 works in four hours on an Australian cruise ship, but he typically auctions 18 pieces in three hours on The Fine Art Auction. That gives him 10 minutes per piece, most of which he spends on education about the artist, the item and anything else that could help turn viewers into collectors.

Keeping those viewers from changing the channel requires an auctioneer with experience, knowledge, a good sense of humor and quick thinking. He also needs to be a performer, English says. “I think a lot of auctioneers will maybe admit to being frustrated actors.”

“Richard’s done a great job leading this, building that engagement, that camaraderie with the audience,” says PJ Lynch, CEO of AVC, who plans to expand the art show globally.

Locally, English wants to get to know his new home better. He has made British friends cheering on the West Ham United football club from Fadó Irish Pub near his apartment, and he hopes to meet more people through benefit art auctions for top Atlanta charities. Lynch’s company will donate the art, and English will give his time and talent.

One collaboration planned for January at the Georgia Aquarium brings his experience full circle. It is a fundraiser for the Denver-based Blind Institute of Technology, for which Lynch is an adviser. English will use the job skills he learned beside a nearly blind man to benefit a nonprofit that prepares visually impaired people for their own careers.