Paddling With Your Pup

Branden May got his first camera when he was 12. Though it was a hand-me down from his dad, it sparked his imagination and established a lifelong relationship with photography. Today, the Brookhaven resident and self-taught photographer spends his spare time capturing scenes of Atlanta’s architecture as he prepares a book of photos for publication later this summer.

How did your photography career develop?

I eventually got a new camera after the one my dad gave me, and I figured it out on my own. After I graduated from Woodward in 2007, I went to Morehouse and studied English. I didn’t have time to take a lot of pictures back then—something I regret. But after I graduated and my first child was born in 2015, I bought a new camera and started taking a lot of pictures, especially portraits of the baby, my wife, her family and my family. It soon became a second career.

What was your first career?

I was working in the University of Michigan’s library system for about 10 years and then a small tech company when COVID hit. The company closed its office, and my wife has a flexible job in finance, so we came back here to be closer to family and friends. When the company wasn’t too understanding about my not wanting to move back, I decided to leave last August and become a full-time photographer. 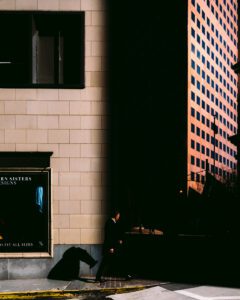 I don’t have a studio, so if people email or call me to set up a portrait, we go out to use the natural light. I like using Piedmont Park as a backdrop. Then I spend time editing at home or at a coffee shop. If I don’t have a portrait session scheduled, I’m out most days doing street photography.

What draws you to shoot street scenes?

Atlanta’s architecture is my favorite, and the buildings stand out to me more than anything. I think it’s because I grew up around Atlanta seeing these buildings, the people and the culture. I’ve seen them in different types of weather, lighting and times of day, and that really draws me in. It’s something I’ve come to understand, and how it comes together in my photos is beautiful. Also, shooting on the street is so unpredictable. Everything changes right in front of you. I could go to the same spot every day and have entirely different pictures and scenes.

Do you have favorite buildings to shoot?

I love the area across from the Georgia Pacific building downtown, near the central [Atlanta-Fulton] library. If I start there around 11 a.m., I can watch the sun go from left to right and change the whole scene. Peachtree Center complex is another favorite; it’s so futuristic and has all those bridges. It has a lot going on! AmericasMart nearby is another one of my favorites. And I like the old-school feel of shooting them in black and white. It’s pretty forgiving if you miss your exposure or shutter speed. I’ve also been shooting mostly digital, but I’m getting back into film. Digital is so instant: You can see immediately what you shot, and you can shoot as much as you want. Seeing the image right after you shoot is a good thing, but with film, there’s also a nice feeling of not knowing what you’re going to get until you develop it. It’s kind of scary and cool at the same time.

Paddling With Your Pup