FOR ARTIST ANDERSON SMITH, MAKING IT BIG MEANS LOOKING BACK. 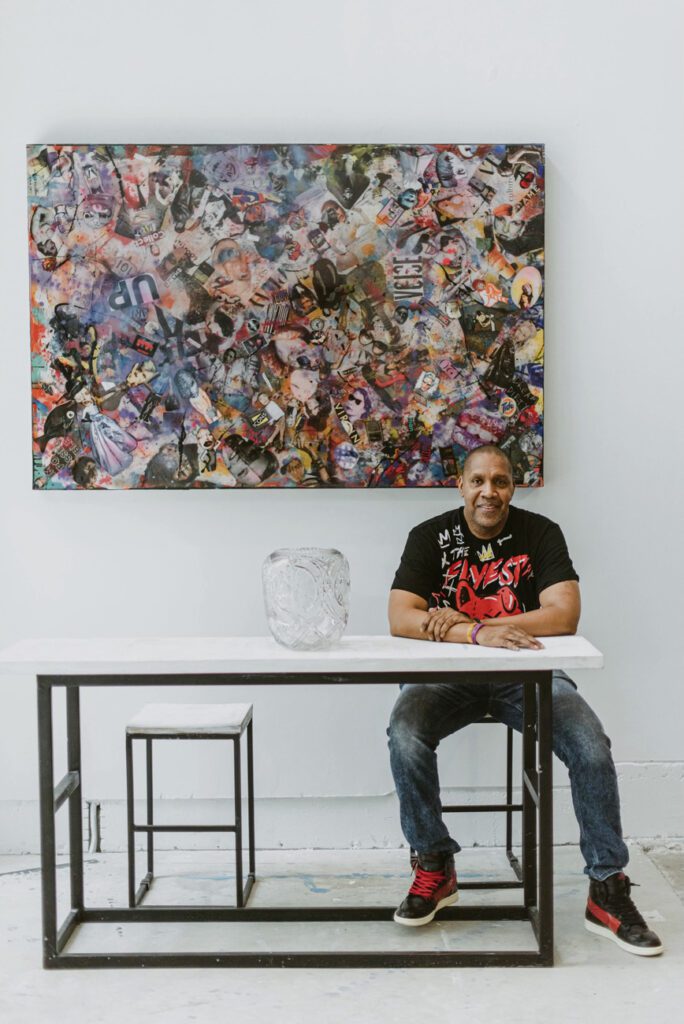 Anderson Smith’s art is born of inspiration. The first flash of insight came while he was growing up in Chicago and watching an aunt draw. “I sat at the table and started doing it, too, until I got good at it,” Smith recalls.

Between that start and his current career as a mixed media artist whose works are snapped up by celebrities and collectors, Anderson went into the military after high school, studied sociology at Barber-Scotia College in North Carolina, got into photography and wound up working in Texas. When a best friend moved to Atlanta, Anderson was inspired to follow.

In the 21 years he’s been a local, Smith, now 50 and living near Lenox Square, has pursued photography, focusing on shooting fashion and product layouts for local magazines and companies. But it took prodding from his girlfriend for the self-taught artist to move into the professional sphere.

“She’s the one who ignited the fire under my career,” Smith says. “She took me to New York in 2011 for the first time, and all I did was walk around with a camera. I was able to do a pop-up for Atlanta Celebrates Photography because she pulled together my work from that trip.”

The death of his girlfriend five years ago proved to be another inspiration. “Out of depression, I started painting again,” he says.

Now most of his attention is focused on producing mixed media collages and oversized works in acrylics and spray paints, many of which are around 6-by-7-feet and priced from $6,000 and up. The inspiration for these creations is often drawn from his past, Smith says.

“I’ve been going back to my childhood and my favorite cartoon characters. I always wanted to be a cartoonist, so I went back to what I did as a kid. I’ve also done a series of collages that look back at entertainment icons like Bowie and Lennon, and themes from the ’90s hip hop era.”

Some of his pieces have found homes on the B concourse at Hartsfield- Jackson Atlanta International, the Clermont Hotel in Midtown, Cam Newton’s Fellaship.ATL eatery in Castleberry Hill and in the home of rapper and fan T.I. Others are on display at Buckhead Art & Company, where Smith has been represented for more than two years.

“I walked in there one day and started talking to Katie Jones, the owner. She had a photography show coming up, and she put me in it. We formed a relationship, and she even lent me space near the gallery to do my work.”

Smith is now one of Buckhead Art & Company’s top-selling artists, and open to whatever inspiration comes next.