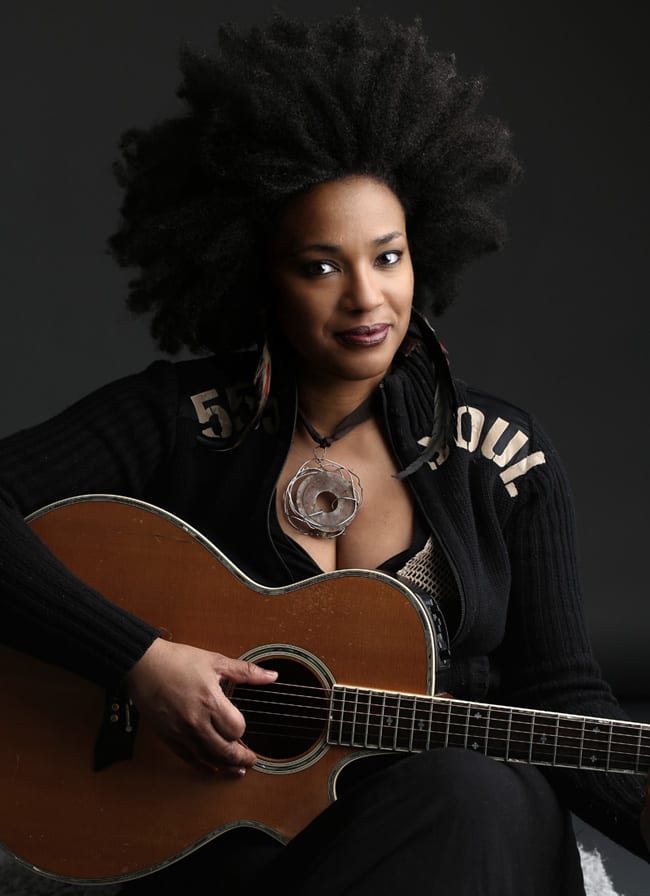 “I LOVE THE GIVING KITCHEN … I WANTED TO FIND A WAY TO PAY MY GOOD FORTUNE FORWARD.”

Roberts, a 19-year veteran of the Atlanta music scene who has performed at Lilith Fair and the Montreux Jazz Festival, was trying to get pregnant in 2013. She and Donati thought they’d been successful, only to realize that the lump in the singer’s belly was actually a fast-growing fibroid tumor. Although such tumors are common in women (particularly African-Americans) and usually benign, the health scare proved to be a harrowing ordeal.

“During surgery my doctor discovered that it was fusing to my nervous system, so I could have lost bodily function below my waist if we’d waited four more weeks to operate. Four weeks!” she repeats, incredulous. “That was sobering and frightening. So I had major surgery to remove this grapefruit sized tumor in February 2014, and just had another related minor surgery in December 2014.” Roberts, a member of the Atlanta chapter of the National Academy of Recording Arts & Sciences, was financially assisted through her $40,000 medical crisis by MusiCares, the nonprofit arm of the Grammys.

“MusiCares helps musicians manage basic healthcare and also helps when they’re in financial need during medical crises,” Roberts explains. “They consider coverage for your medical bills as well as your primary household expenses, like mortgage/rent, gas and electric … I am 100 percent debt-free after two surgeries (one of them major), and that is as close to a miracle as I can fathom in this day and age.”

In celebration of her recovery, Roberts made her 12th annual birthday concert at the Variety Playhouse last August a benefit for The Giving Kitchen, the restaurant industry nonprofit inspired by the community support that surrounded late Atlanta chef Ryan Hidinger after he was diagnosed with late-stage cancer.

“I love The Giving Kitchen. They basically do for restaurant industry workers what MusiCares does for musicians, providing emergency medical grants for folks in need. I wanted to find a way to pay my good fortune forward,” she recalls, “so we organized a silent auction with help from my friends Kristian and Brandon Bush of Sugarland, comedian Margaret Cho and others. It really liberated me and definitely contributed to my own healing process.”

Now fully healed, Roberts’ plans for 2015 include re-recording her 2011 album, Blackeyed Susan, which she wasn’t happy with the first time; doing another birthday party show, which she hopes will benefit Trees Atlanta; and helping lead the charge on lobbying Congress for fair royalty rates for musicians. She’ll also be doing programming for the Center for Civil Human Rights’ music series, “Moving the Movement,” which will highlight past and present artists addressing sociopolitical topics through their art.

But most importantly, she says, “I’m looking forward to not being in any operating rooms in 2015!”