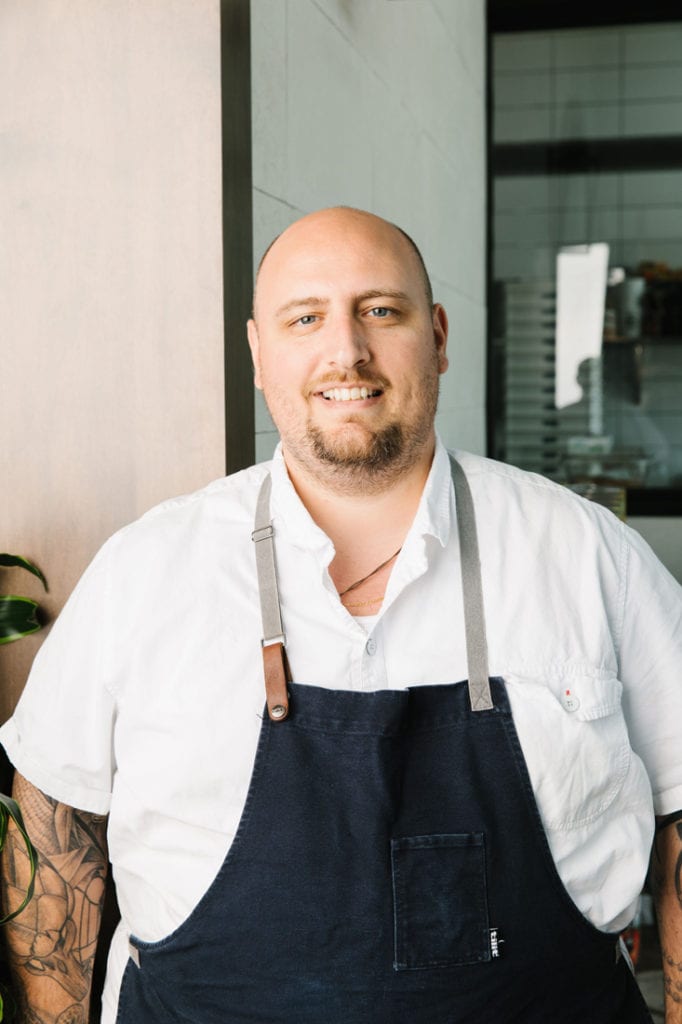 It’s the age-old story of a boy who embraces his heritage by cooking with those who came before him. In this case, the boy—now man—is Pat Pascarella, executive chef and owner of Grana in Piedmont Heights and The White Bull in Decatur. Born to a family of Italian immigrants in Connecticut, Pascarella learned his way around the kitchen from his mother and grandmother. He attended culinary school, trained under James Beard Award-winning chefs in New York and Miami, and ate a path around Italy. He owned and operated a restaurant in Connecticut for eight years before moving to Atlanta in 2017 as executive chef at The Optimist. “I wanted to get to know people, the city and how things work here,” he says. A year later, he opened The White Bull, putting a spin on traditional Italian fare and focusing on farm-to-table ingredients. In March 2020, he expanded with Grana, which he describes as a “Southern-style restaurant focused on Neapolitan pizza.” (Grana is also known for its see-and-be-seen rooftop patio facing Piedmont Avenue.)

After working 18 to 20 hours a day for months, Pascarella is finally seeing the fruits of his labor. “The White Bull did a good job of putting my name out there. Grana is putting us on the map,” he says. We spoke to him to learn more about his cooking and his plans for the future.

How’d you end up in Atlanta?

My first choice was Italy. My wife said no, and my two brothers-in-law live here. I came to visit 10 times in 2015- 2016 to see if this was where I wanted to be. Ford Fry was really starting to hit his stride. I liked what he, Linton [Hopkins] and Anne Quatrano did to pave the way for us younger, likeminded individuals.

How has your cooking changed throughout your career?

For a long time, I was so focused on being this high-end, fine-dining chef. Over the years, I realized I should go back to my roots and double down on what I’m good at: Italian cuisine with a twist. I like trying different pasta shapes no one has ever heard of. You have to learn what people want. Decatur is more out there—people are willing to try oxtail, dandelion and foie gras. In Piedmont Heights, we stay true to what Italian food is but put a little Southern approach on it.

Why is it so important to you to use local ingredients?

They are so readily available now. I get 50 emails a week from local farms. Our purveyors are using local farms, too. The Italians have been cooking local their whole lives. They go in their backyard and pull what they need.

What would you do if you weren’t a chef?

I’d be a farmer. I really enjoy the land, pigs, cows and chickens. I love the science behind all of it. I love that when you grow something, you need to replenish the soil. In the next three to five years, I’d like to buy a farm. It’s the best way to make sure I have [fresh] tomatoes through November and basil the whole year. I’d live there. When my wife and I are in our 60s, we want to open a small bakery (she’s a pastry chef) with a sandwich shop that does finer-end dining at the end of the night.

What do you do for fun these days?

I love to fish. I also love to drive around with my wife, looking at houses and farmland. I’m trying to find the balance between work and being at home. We have a 2-year-old and a 5-year-old. I like to play soccer with them or do whatever they’re into.

What’s next for you?

I have another four to six concept ideas in my computer just waiting for me to find locations. I’m thinking about bringing thin and crispy New Haven-style pizza to Atlanta. How cool would it be to do a Sicilian-style seafood restaurant or a Roman-style vegetable and pasta spot?