Pensacola dazzles with outdoor allure, history and so much more

I admit it: I’m guilty of assuming most Gulf-side beach towns are similar with their pretty beaches, kitschy souvenir shops and amusement attractions. If you’ve seen one, you’ve seen them all, right? What a pleasure it was, then, to be proven completely wrong on a recent visit to Pensacola.

There’s history at every turn, as the Florida city, and beach of the same name, is the site of the continental United States’ first European settlement, established in 1559 by Spanish explorer Tristán de Luna. It’s also the birthplace of naval aviation in the U.S. The Naval Air Station is the home of Blue Angels, the 16-member show squadron famous for its death-defying fighter plane stunts, so it’s not uncommon to see a practice formation overhead. Divers can also explore the many shipwrecks in the area, including USS Oriskany, an 872-foot Essex-class aircraft carrier that was deliberately sunk in 2006 to become the world’s largest artificial reef.

I opted to stay close to the quaint downtown with its great boutique shopping and wide historic squares. The Lee House, built to resemble an original 1866 home in the same location, borders Seville Square, and each of the nine rooms and suites is uniquely decorated with colonial style furnishings. Guests have round-the-clock access to a kitchen stocked with tea, coffee, sparkling water, wine and daily-baked treats.

If you’re like me, it’s impossible to resist the pull of the water when it’s close by. From downtown Pensacola, you’re just a half-hour drive to Perdido Key, the island that straddles the Florida- Alabama border, with its picturesque sea oat- and sand dune-punctuated beaches. Even closer, across two bridges, lies Pensacola Beach on the Santa Rosa barrier island. 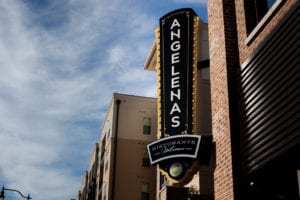 Pensacola’s food scene was an unexpected pleasure. Far from the one-note of fried seafood joints (though you’ll find plenty of excellent options if that’s your craving), I had a memorable meal at Angelena’s Ristorante Italiano. Food Network host and celebrity chef James Briscione is in charge of the kitchen, and my simple yet decadent choices of house-made focaccia, Caesar salad and wood-fired meatballs were flawless. For more inventive fare—and brilliant cocktails—Restaurant Iron, led by chef Alex McPhail, didn’t disappoint. It might seem strange to wax poetic about a salad, but my wedge of butter lettuce topped with bright tomatoes, saltycrisp bacon lardons, creamy gorgonzola and basil oil was unforgettable.

The next day, I drove inland to see what other curiosities I might discover. I visited the 4,200-acre Tarkiln Bayou Preserve State Park, home to one of the largest colonies of rare white-topped and parrot pitcher plants in Florida. These carnivorous plants are best viewed from the 1-mile Tarkiln Bayou Trail’s boardwalk. Depending on the season, you may find a proliferation of orchids as well.

Funny enough, my favorite experience was something even my Floridian friends didn’t know about. Uncle Sandy’s Macaw Bird Park started as a nonprofit in 1998, and the sanctuary is now home to more than 170 birds, including amazons, cockatoos, cockatiels, peacocks and emus, many of which were rescued from untenable situations. A volunteer gave me a cup of pasta and peanuts, and showed me how to safely feed the 1.5-acre park’s avian residents (“You want to leave with all of your fingers!” she told me). As I wandered, I began to hear “Hello!” and “Cracker?” from nearby cages. Another volunteer offered to let me inside an enclosure to meet a friendly yellow-and-blue macaw named Sammy, whose active duty military owner was deployed. Sammy flew from his perch to my outstretched arm and even edged close enough on my shoulder to pose for a selfie.

If travel is about discovery, this destination within an easy drive from Atlanta checked all the boxes and proved that Pensacola is much more than meets the eye.