Marcus Grimaldi can’t read sheet music, yet he can play any song by ear on seven different instruments. This innate talent for tone serves him well in his company, Next Level Recording. As a recording, mixing and mastering engineer, Grimaldi perfects the sounds of singers, bands, podcasters, films and voice-overs.

When Grimaldi was 3 years old, his parents realized he had musical talent when he kept the beat while banging on pots and pans. They bought him a children’s drum set, and young Grimaldi continued keeping the beat to Elvis’ “Hound Dog.” When he was in third grade, his parents bought him a full-sized drum set, and the little musical genius taught himself to play. Today, he can play songs by ear on the drums, guitar, bass guitar, piano, ukulele, dulcimer and harmonica.

Also a talented baseball player, Grimaldi received two full college sport scholarships (one at the Division I level) before deciding to pursue a music career knowing he could play music longer than baseball. He transferred to Middle Tennessee State University in 2011 and joined a recording industry program that accepts only 40 students per year. “One of my teachers was Michael Jackson’s producer. Another won his sixth Grammy when he was my teacher,” Grimaldi says.

Fresh out of college in 2013, he followed in the footsteps of his entrepreneurial family and started his own company, the Sandy Springs-based Next Level Recording. “I wanted to be my own success story,” Grimaldi says. He found this success working with artists such as Delra Harris, winner of the 2018 Independent Music Award’s Best Album in Contemporary Christian.

Grimaldi explains there are three stages to the production of a song: recording, mixing and mastering. “There is the recording aspect where we’re setting up microphones, and we’re recording the primary focus of the song: the drums, the guitar, the vocals, the bass guitar,” Grimaldi says. During the mixing phase, he balances volumes, moves sound around in the stereo spectrum and gives clarity to the singer and instruments. Mastering is the fine-tuning stage. “Mastering is basically Photoshop for music. I have this completely mixed song, and now I’m listening to it with fresh ears. I’m saying ‘The bass could be turned down a little bit, and it needs to be compressed as a whole,’” Grimaldi says. 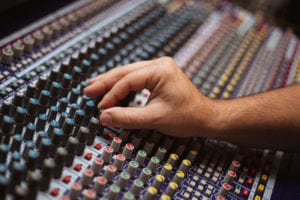 The Sandy Springs resident wears many hats in his recording studio, but his favorite tasks are mixing and mastering. “I have the most fun in those areas because they’re very creative,” Grimaldi says. As a Foley artist, a person who adds everyday sounds to commercials or films, Grimaldi creates footsteps, moving jewelry or silverware clinking to coincide with the action on screen. Many times he creates these sounds in his own studio. “It’s actually easier to create those sounds than to spend hours trying to find some perfect sound in a library that has 250,000 sounds in it,” says Grimaldi.

When he’s not working, Grimaldi enjoys sharing his audio knowledge through tutorials on YouTube. “It’s really great to see the feedback. They ask me questions, and I can help other aspiring mixing or mastering engineers figure out how to do things. It’s kind of like my way of giving back.”