What You Should Know About The Current Trump Tax Plan 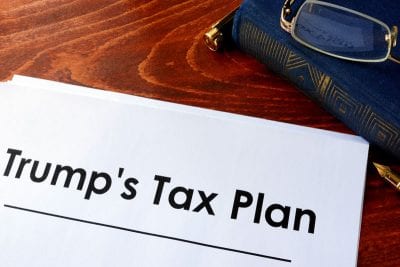 Almost a year after President Trump was elected to office, none of the main agenda bills have passed in Congress.  With Thanksgiving looming around the corner for a Congress shut down here in 2017, one of the big questions will be whether the major tax bill passes before the end of the year.  This single tax plan could have a big effect on how the market finishes here in 2017 and its potential impact into 2018.   Here are the key points you should know about the current Trump Tax Plan.

Businesses Get The Biggest Cut

The other main business cut comes through corporations that are called “pass through” corporations.  For most of you, these are LLC’s or S Corporations.  Currently, the net income from these corporations are classified as regular ordinary taxable income, and business which earn a large amount of net profit can get as high as 39.6% tax in the current system.  The proposal is to move that rate down to 25% for pass through income.

Most people still don’t really understand how they are taxed.  The federal income tax system is a progressive tax system.  This means you pay tax up to a certain level of your income at a specific rate and then the next layer of income is taxed at a higher rate when you jump brackets.  Currently, we have seven different income tax brackets.  Underneath the proposed system, we will move to three brackets of 12%, 25%, and 35%.  This will lower the top tax bracket from 39.6% and increase the lowest bracket from 10% to 12%.

Can You Still Itemize Your Deductions?

In short, the answer is yes.  Underneath the current proposal, deductions such as your local income taxes, personal property tax, state income taxes, and miscellaneous deductions would all be eliminated.  The two main deductions you would still be able to itemize would be your mortgage deduction (so we don’t kill the real estate market) and your charitable contributions.   For some taxpayers, these changes will have little to no impact whereas others who pay a significant amount of local and state taxes could see an increase in taxes because you have less deductions.

Originally, Trump’s plan has people who make less than $25,000 as an individual and married couples who make less than $50,000 not even filing a tax return because most of those folks don’t pay tax today.  With the current proposal, Trump’s plan is to increase the standard deduction from $12,700 to $24,000 for a family and $6,350 to $12,000 for individuals.   While on the surface this seems like a huge boom, consider that your personal exemptions (currently at $4,050) will also be eliminated as well.  This means for a family of five who got over $20,000 of deductions from the personal exemptions, they may not benefit from the increase in the standard deductions.

High Income and High Net Worth Taxes Going Away

If the legislation passes as suggested today, the Alternative Minimum Tax will be eliminated.  This is probably one of the most complicated taxes to understand, and most taxpayers have no idea how this is derived under current tax law.  It will affect mostly high income tax payers.   The bigger legislation would be a complete elimination of the federal estate tax.  For families who have an estate north of 11 million dollars, they would be able to pass their entire estate on to the families completely tax free.

We won’t know for a few weeks (and possibly into next year) if a tax law will pass at all let alone the highlights I have outlined in this article.   The main debate is whether this tax cut will really help all Americans or only those who make a lot of money.   No matter what system we put in place, it’s becoming evident that nobody thinks they are getting a fair deal.   Keep these bullet points in mind as you plan your taxes for 2018.