Head out for this culture-filled drive to Summerville, Georgia. 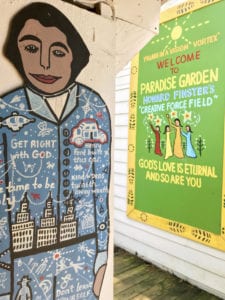 Georgia is home to so many unique places that it’s perfect for sightseeing romps, especially when spring is in the air and the compass is pointing northwest to Summerville. Just a 1.5-hour drive from the hustle and bustle of Buckhead, this sleepy little city earned its name as a popular summer resort in the 1800s. A century later, it became the heavenly haven for world renowned folk artist Howard Finster, who poured his heart and soul into creating an outdoor wonderland that’s dazzled visitors for decades. Paradise Garden is not only a gem in itself, but getting there is also half the fun.

Hit the brakes in Cartersville for Etowah Indian Mounds State Historic Site. Stretch your legs at this 54-acre archaeological treasure, where Native Americans planted roots on the banks of the Etowah River from 1000 to 1550 A.D. A designated National Historic Landmark, it’s the most intact Mississippian culture site in the Southeast. Scope out the artifacts in the museum, from beaded adornments to hand-carved effigies, then scale the earthen mounds, three of which are accessible via designated stairs for a sweeping view of the grassy grounds. Enjoy a picnic and nature trail by the river.

Next, head 30 miles north to Calhoun for a quick detour to The Rock Garden. Tucked in a sun-dappled sanctuary behind the Seventh-day Adventist Church, this local tourist attraction features an elfin village of more than 50 hand-built stone structures, including diminutive replicas of Cinderella’s castle, the Roman Colosseum and the cathedral of Notre Dame. The whimsical wonders are crafted from pebbles, shells and other assorted materials in a volunteer project led by Dewitt Boyd. Lush greenery, pretty blooms and a meandering stream set the scene.

From there, it’s another 30-mile skip west to Summerville to explore Paradise Garden on a self-guided tour. Serendipitously spread on a 2.5- acre parcel in a quiet neighborhood, this museum is heralded as Finster’s greatest artistic feat, imaginatively rendered by his visionary brush and eclectic stockpile of stuff.

Step into a mirror house on stilts above a brook. Poke around relic-filled tool sheds and peek at encased curio displays. Stroll through an elevated open-air gallery, decked with floor-to ceiling art and mementos. Meditate in the chapel. Ponder the sky-high bike tower, squatty bottle house, painted Cadillac and cryptic sarcophagus.

In the Mosaic Garden, thousands of found objects, utilitarian to decorative, are embedded in concrete shrines. Other sculptural oddities sprout up like maniacal mushrooms on the verdant grounds, crisscrossed by a kaleidoscopic maze of walkways paved with bits and pieces of glass and tile. The crowning glory is the five-story World Folk Art Church, fabricated to resemble a four-layer, 12-sided wedding cake. The hodgepodge of man-made ornamentation bears witness to the life mission of the self-taught artist. After retiring as a Baptist minister and jack-of-all-trades, Finster settled in Summerville, erecting the Plant Farm Museum in his backyard in 1970 as a roadside tribute to inventors. Over the years, the swamp-drained land grew in scope and stature, evolving into his own Garden of Eden as he was led to spread the Gospel through creating thousands of sacred art paintings.

In the ’80s, Finster famously collaborated with R.E.M. on album cover art, and the video of the group’s debut single “Radio Free Europe” was filmed in the garden.

In 1994, a portion of Paradise Garden was permanently installed at Atlanta’s High Museum.

With so much to see en route, day-trippers can recharge their batteries with an overnight stay at one of Paradise Garden’s quirky guest cottages (available through Airbnb), turning the road trip venture into a weekend getaway.

SUMMER IN THE CITY