There’s something so comforting about cuddling up with a purring cat or enjoying a jog with a loyal dog. Our pets are often those nonjudgmental, always supportive companions who, regardless of our moods, offer us their devotion.

And some pets go even further. Not only do they provide unconditional love, they also provide needed support for the seriously ill and disabled. Three such exceptional animals make their homes in Buckhead, acting as a young girl’s medical monitor, an example of survival and hope, and a set of legs for those who can’t walk on their own. 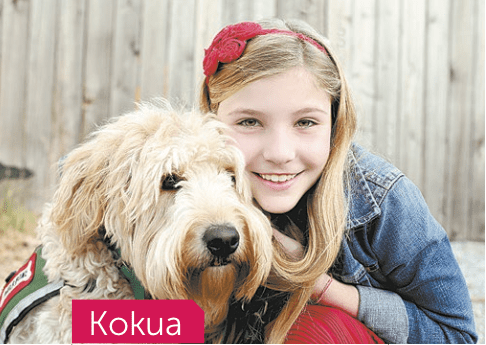 The Alpharetta-based Canine Assistants is one of the premier facilities in the country that trains dogs to be working companions for the visually or physically impaired. About two years ago, the nonprofit also began training dogs to be sensitive to physical conditions, such as the Type I diabetes 10 year old Gigi Johnson was diagnosed with. The Westminster student heard about the program through a presentation at her Brownie troop and took the idea back to her parents, who put their names on a waiting list. It took a year, but in the fall of 2013, the family was finally invited to the facility where five trained dogs were introduced to Gigi.

“They came into the room one by one, and we got to see which ones were most attentive to her,” recalls Krista Johnson. “We wanted the dog to be a good personality match for a young child, but it also had to be very friendly and not aggressive so it could go with her to school. As soon as Kokua came in, she was smelling Gigi’s insulin pump and sniffing her all over. I think in some ways, the dog picked the person.”

Kokua, a 2 year old goldendoodle (half golden retriever, half poodle), had been at the facility since her puppy days and was only the second dog Canine Assistants trained to sniff out sugar imbal- ances. After the match was made, the family collected swabs from Gigi’s mouth and sent them to the facility where they were used to train Kokua to recognize the girl’s distinctive scents. After several more months of training, Kokua finally became part of the Johnson family last fall. Wearing an official working dog vest, she accompanies Gigi to school and her daily activities from homework to playing with her siblings, 7 year old Bram and 6 year old Piper. She’s always alert to any shifts in her owner’s physical condition and ready with a gentle tug on the girl’s shirt or pants to let her know it’s time for medication.

“It doesn’t happen very often, but she even lets me know if there’s a problem in the middle of the night,” Gigi says. “The best part is she makes me feel there’s always someone on my side. And she’s really snuggly and fuzzy.”

The entire family, as well as their cocker spaniel Lula, has taken to Kokua as well. “When she has her vest on, she’s very calm and doesn’t seek attention,” Krista says. “But when it’s off, she’s on the furniture, romping with our other dog and opening Tupperware containers to eat food she’s not supposed to. She’s such fun and nice to be around, but at the same time, she gives us tremendous peace of mind.” 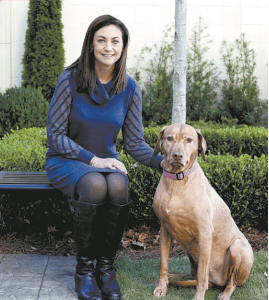 Having been bred to chase lions, it’s surprising that 10-year-old Rhodesian Ridgeback Roxy isn’t always running at breakneck speeds. But this 85 pound trained therapy dog is one of the most popular visitors to a number of local hospitals and care facilities where her calm demeanor brings a degree of peace. And she has a story to tell that makes her even more appealing to patients.

“Roxy’s a cancer survivor herself,” says owner Laurie Berkin, who got the dog from a breeder when she was a few months old. “In the summer of 2013, she had a skin cancer tumor removed and went through chemotherapy, just like the patients we visit at St. Joseph’s radiation oncology center. For a year, she went for treatment every three months, just like a person, and had tests to make sure there were no other tumors. The good news is that in September she had a year of clean scans, so now she only goes back every six months.”

Even before Roxy had her own story of survival, she and Berkin were making the rounds at Northside and St. Joseph’s hospitals and a Dunwoody rehab center as part of the Happy Tails Pet Therapy program. In the last nine years, Roxy’s become an attraction because of her spiky mane, an unusual feature of the breed. But her size sometimes made Berkin wonder if she was well suited to visit hospital rooms.

“For a while I was really worried about her jumping up on the beds, which she does,” Berkin says. “But once there, she snuggles up and lets people pet her. She’s also tall enough that she’s practically bed level, so people can just reach out and pet her, too. Everyone’s fascinated by the hair on her back; it’s like a mohawk.”

Four years ago, Roxy and Berkin went through crisis response training so they can be part of a response team that goes in after an emergency or natural disaster to offer emotional support to victims. “It’s usually well above and beyond hospital visits; it’s dealing with people who are in crisis,” Berkin says. “The good news is there was never a disaster that we’ve been called out for. More people get to hear about Roxy’s cancer, and it’s amazing to see how they react to her as if she were a human survivor. It’s another positive story for them to hear.” 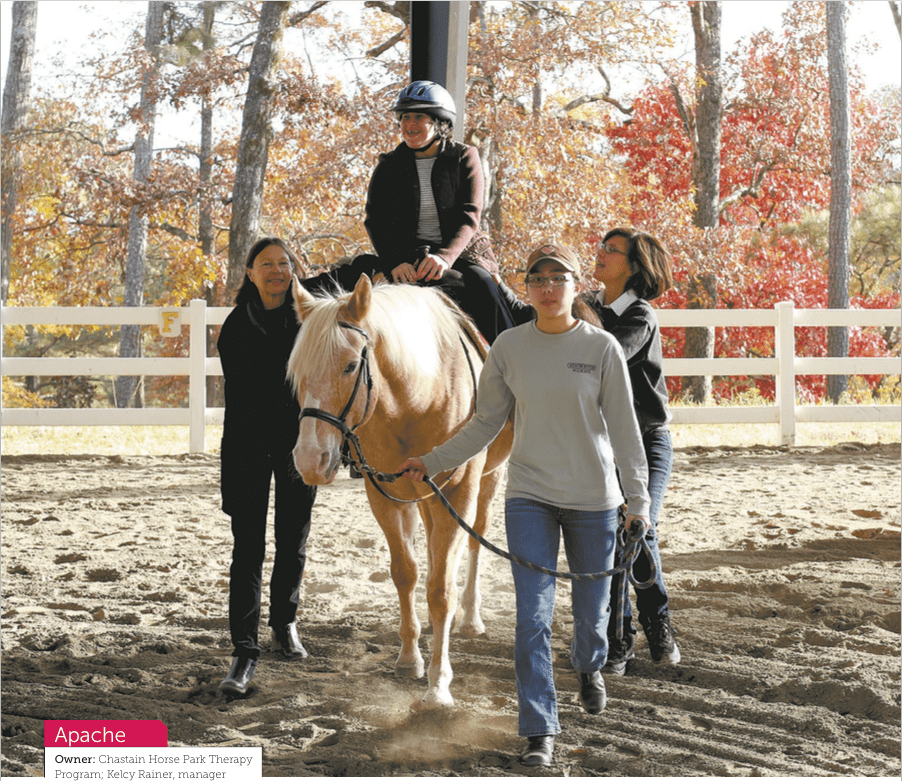 Of the 20 horses that participate in the Chastain Horse Park’s therapeutic riding program, perhaps none is as adaptable and easy-going as Apache. The 27 year old palomino Appaloosa has been providing support for disabled riders since he was purchased in 2006. To participate in the program, Apache completed several months of training largely centered on desensitization, such as having rubber balls tossed under his hooves and trotting around a ring with walkers close by his sides, to make him ready for whatever situations a therapy session might create. What makes him a particular favorite with the youngsters who ride him is his unflappability, says program manager Kelcy Rainer.

“Our horses need to have a really good temperament that can handle the strenuous work of carrying a lot of off balance weight,” she says. “Apache is our Steady Eddie. He tolerates larger, unbalanced riders, and he takes care of our smaller pipsqueaks that he can barely feel on his back. He’s patient and accom- modating in difficult circumstances; for instance, we utilize a lift for riders who are in wheelchairs or im- mobile, and the apparatus can be very scary to some horses. But Apache just goes about his job willingly and helps so many clients achieve their goals.” Those goals are physical, cognitive and social, Rainer explains. “A horse’s natural gait mimics a person’s walking gait, so sitting on a horse exercises and strengthens the same muscles as walking. The rhythmic motion even helps people who have trouble organizing thoughts. Plus there’s an emotional bond between the rider and the horse that’s great; the horse is nonjudgmental. And it’s empowering for a 6 or 7 year old to get on this 1,000-pound being and control it.”

Apache spends most of his days working with riders, but he occasionally gets to break out of his working routine. In October, he was part of the program’s horse show, sporting a costume from “The Lion King” and looking every bit a regal creature. And every so often, he does show a little bit of ego, Rainer says.

“He can be a little bit grouchy at times,” she says with a laugh. “But he also has a sixth sense that tells him when to bow his head to the lap of an 11 year old in a wheelchair. He’s very endearing.” 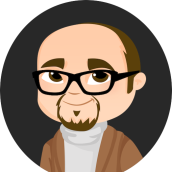