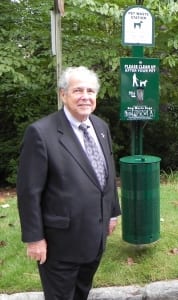 The 28-square-mile Buckhead area is known for its stately historic homes, lush landscaping and a certain refinement not found anywhere else in the city. But accord- ing to former Mayor Sam Massell, founding president of the 26-year-old Buckhead Coalition, the area is evolving.

“The growth of apartments in Buckhead over recent years has been phenomenal,” Massell says. “In 2011, there were 12,000 and, currently, 9,000 are under development a 75-percent increase. Most of the occupants are 25- to 35-year-olds and many have pets, but no yards. Where else to walk them, but nearby neighborhoods?”

Since the coalition’s mission is to “nurture the quality of life and help coordinate orderly growth,” the organization decided to act preemptively to protect the neighborhoods before pet waste became an issue. Almost simultaneously, Shannon Centola, owner of pet sitting company Buckhead Pet Pals, approached the coalition with a solution. How about partnering on waste stations to accommodate her pet walkers and residents in the area?

The coalition wrote letters to neighborhood associations in June of 2011 asking if they would like free Pet Waste Stations in their communities. The only caveat was that they had to agree to pay $25 and maintain them.

The response was overwhelming. By August of 2011, 45 stations appeared along neighborhood streets, greenways and parks. Four more were installed on the Beltline Trail in the Collier Hills Ardmore neighborhood in March of 2012.

Livable Buckhead (a sustainable non-profit civic association) joined in partnership with the Coalition and Pet Pals in November of 2014 to set up four additional stations along Phase I of Path 400. More are planned along the trail as it expands.