This Caribbean getaway is so close, it’s almost home

One of the advantages of living in Atlanta is the ease with which beach lovers can escape the city’s land-locked scenery and find serenity in the clear blue waters of the Caribbean. While some island journeys may involve hours and multiple legs, one destination is as close as 57 miles from the U.S. mainland. 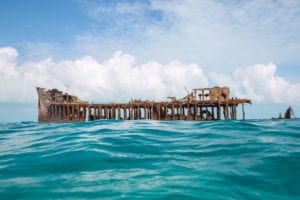 As the westernmost edge of the Bahamas, Bimini’s three north, south and eastern coral islands are barely specs on the map, measuring just 9 square miles total. They anchor some of the most popular fishing, diving and snorkeling waters in the Caribbean. It’s possible to get up close and personal with some sea creatures, including sting rays that happily flit around the feet of anyone holding a handful of bait in the shallow waters on the beach of Honeymoon Harbour. More adventurous sorts can sign on for a personal version of “Shark Week” at the world-renowned Sharklab, where marine biologists take breaks from studying the various species that flock to the tropical waters to lead visitors through tours and excursions that include snorkeling with reef sharks and feeding lemon sharks.

Beyond sea life, the islands’ crystal blue waters invite snorkelers to discover the underwater world of reefs and wrecks. One of the area’s most famous destinations is Bimini Road, a half-mile stretch of enormous stones just 18 feet below the surface. Legend has it they’re part of the path that once led to the lost city of Atlantis. Another mustn’t-miss snorkeling spot is the wreck of the World War I-era Sapona, a concrete ship that ran aground in 1926 and has been stuck in 15 feet of water ever since. During World War II, it was a bombing target for fighter plane trainees. (Eerie trivia: The disappearance of five returning bombers in December 1945 put an end to those missions, but the mystery of the lost planes lives on.)

Add to Bimini’s array of activities one of the most pleasurable: lying under a shade umbrella on a white sand beach while sipping a cool cocktail. That experience awaits guests at the Hilton at Resorts World Bimini, the islands’ premier vacation complex. Most arriving guests land at Bimini’s tiny airport on the south island and are whisked by ferry to the resort’s marina entrance on the north island. The property provides the perfect base for sea-bound excursions, as well as a broad stretch of beach where servers keep sunbathers fed and hydrated. The resort also boasts a kids’ club, spa and a variety of dining experiences, including a pizzeria, pub, rooftop piano bar, a formal Continental dining room and a sushi bar. The hotel’s big attraction is a 10,000-square-foot casino, outfitted with gaming tables and slots that entertain boat owners and island visitors alike.

Views of Bimini’s blue water are never far from the Hilton’s guest rooms, as most overlook the marina and the sea beyond. A dip in the rooftop pool or a soak in the nearby hot tub affords sweeping vistas. Some rooms on the main floor also have patios that meet the edge of a wading pool perfect for floats and noodles, letting guests cool off just feet from their beds.

Getting to Bimini can be as much fun as a stay there. Along with the usual flight options to the south island, visitors can decompress during a two-hour ferry ride on Balearia Caribbean from Port Everglades. In a hurry? Grab a seat on the daily seaplane trips operated by Tropic Ocean Airways from Fort Lauderdale or Miami. The 30-minute excursion brings guests right to the Hilton’s dockside and the start of a Bimini trip sure to start and end with a relaxing “aaahhh.”